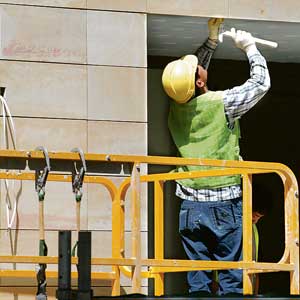 SHIFT: Rates for a range of construction materials have dropped during the past six months. Photo: Grant Currall

DEVELOPERS who put projects on hold because of increases in construction costs in 2008 are being urged to review their plans, with new research indicating a dramatic turnaround in cost growth.

A study of tender returns by property services firm Davis Langdon showed escalation rates for construction costs went from 8 per cent annual growth in 2004 to a peak of 12 per cent in early to mid-2008, but have since come back to virtually zero in early 2009.

Davis Langdon Perth director Neil Dickson said the figures represented a major shift in the dynamic of the construction industry during the past six months.

"What we've seen from the start of 2008 to the end of 2008 is it has gone from 12 per cent down to zero. What that's saying is construction costs remained static over that period, and in some instances even declined," Mr Dickson said.

The report forecasts construction costs will remain relatively low into the foreseeable future, with an escalation of only 4 per cent a year predicted through to 2014.

Among the various inputs, the cost of buying and laying bricks has dropped between 20 and 30 per cent over the past six months.

Meanwhile, the cost of a number of imported products, such as lifts and hardware, has increased because of exchange rate fluctuations.

For major CBD projects, the changes have been more subdued.

"There's only a certain number of contractors that can do that work, because it's on a bigger scale and it's more complicated," Mr Dickson said. "We aren't seeing significant cost movements there; it's almost a two-tiered market.

"But escalation is still lower, about 4 per cent rather than zero."

Hawaiian general manager development Stuart Duplock said there was an expectation among developers for pricing to become more competitive.

"There's discussion among developers who are now trying to target up to a 10 per cent reduction in their construction budgets," he said.

Mr Duplock said the style of contracting had changed, with a greater balance between supply and demand for building services making tendering more commonplace.

"What we'd do now to secure a builder is to tender the work. One year ago it was a struggle to get builders or sub-contractors to tender; what you'd do is work with a builder on a cost plus basis. Now we're engendering competition among builders in tendering," he said.

Master Builders Association housing director Gavan Forster said the housing industry hadn't experienced a major drop in input costs, with fluctuations in materials prices yet to filter through to many builders who were locked into contracts.

He said there had been some reports of sub-contractor rates declining by about 10 per cent.

On the commercial side, anecdotal evidence suggests tender prices have dropped by as much as 15 per cent in the past six months.

"Most that have had projects with building costs too high over the past couple of years are now doing the earthworks, electrical work and taking advantage of these prices but not actually constructing the building yet," Mr Forster said.

"Housing is a different picture. There's more stability in costs, reflecting the nature of activity. Within the housing market, the first homebuyer market is actually quite strong, whereas the commercial tenders are drying up."

DORIC Group chief executive Peter Iancov said a number of organisations within the industry had been submitting prices lower than expectations, with some up to 25 per cent lower than others.

A spokesperson from the Department of Treasury and Finance said the state government's building cost index, which monitors construction costs of government non-residential building, recorded a reduction in building costs in the second half of 2008.

Up to June 2008, forecast BCI values for the next 10 years were published, but the forecasting was ceased due to the high degree of uncertainty in the market. The reports now focus on the historical trend.