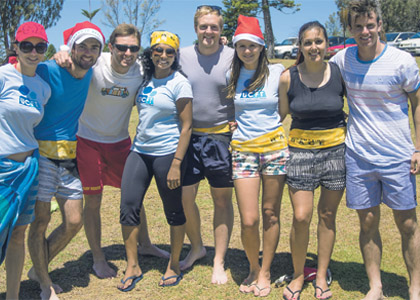 AFTER years volunteering for long-running children’s charity Uni Camp for Kids during her time at the University of Western Australia, Roxy Pope said a conversation with a parent involved in the charity was the catalyst for her to start her own organisation.

“When I was president of Uni Camp for Kids, a parent said to me they wished there was something like this for teens,” Ms Pope told WA Business News.

That parent’s wish came true, with Uni Camp for Teens formed last year by Ms Pope and a committee of fellow Uni Camp for Kids volunteers.

“It was started so it could continue the services Uni Camp for Kids provides, and we chose a mentoring program because we really felt that as a teenager you’re at a critical point where you make decisions that can have a strong influence on the rest of your life,” Ms Pope said.

Through a series of day-long ‘picnics’, Uni Camp for Teens aims to form relationships between teens from financially, socially or emotionally disadvantaged backgrounds and volunteer mentors.

Each of the picnics is centred around an activity, which in the past has included paintballing, a football match, or a trip to the beach.

UCFT has run five picnics since its inception in 2011, and Ms Pope estimates that to date about 60 per cent of the teens involved have been able to develop mentoring relationships with their volunteer leaders.

“Our volunteers are in the workforce and provide positive role models not only on a personal level but also on a professional level,” Ms Pope said.

Ms Pope said this diversity had helped overcome the challenges of establishing the charity.

“One of the biggest challenges, but also one of the most rewarding aspects of this project, has been building up the organisation from scratch and putting in all the risk-management procedures and fundraising guidelines,” Ms Pope said.

Attracting ongoing funding has been another hurdle, although Ms Pope hopes a sound business plan and mature fund-raising strategy will continue to develop, making it easier to garner support.

“One of the catch-22s when you’re starting a new charity is that it’s very difficult to obtain funding when you haven’t done anything yet,” Ms Pope said.

“We don’t have any ongoing funding, but we have received some significant government grants, and some of our employees have also been successful in obtaining employee grants from the companies they work for.

“Individuals and community groups, such as the Cottesloe Golf Course have also made significant donations.”

Allison Luther’s children have been involved with both Uni Camp for Kids and UCFT.

Ms Luther said the best aspect of the teen mentoring program was the opportunity for her children to see a broader spectrum of opportunities.

“[UCFT] shows them there’s a world outside of the hardship,” she said. “The mentors have all been to university, and they show that this is a tool to get better opportunities in life.”

Ms Pope said much of the feedback from parents and social workers echoed this sentiment and, in addition, the quality of the volunteers made UCFT a desirable program for teens.

“We have a strong base of people who are passionate about making a difference.

“That’s really impressive, because people aren’t only giving up their time, they also contribute their money for the cost of running events and their ideas for how to make UCFT better.”