Government and business must involve trade unions to develop plans to train Australia’s workforce for the increased presence of automation, according to Siemens Australia chief executive Jeff Connolly. 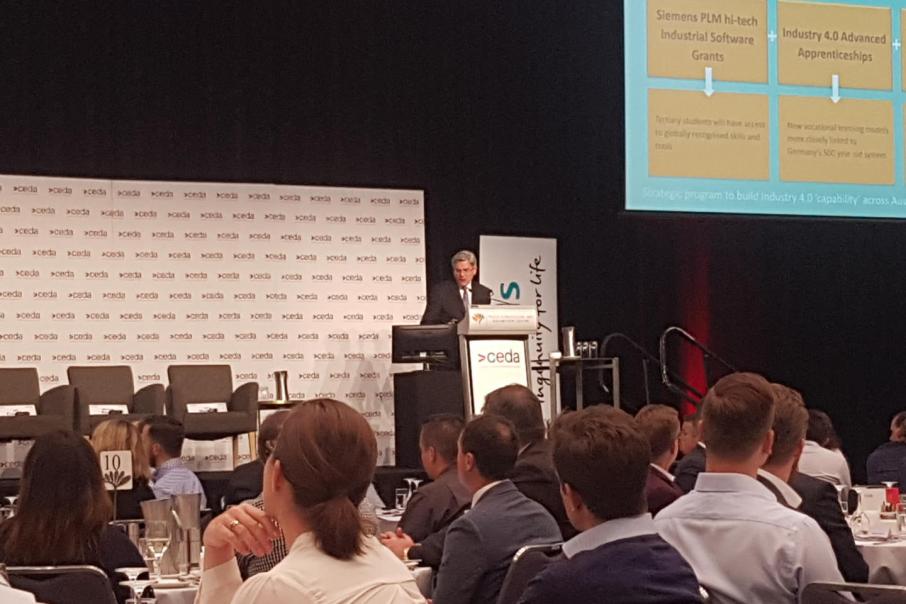 Jeff Connolly says unions need to be involved when thinking about the future of work.

Government and business must involve trade unions to develop plans to train Australia’s workforce for the increased presence of automation, according to Siemens Australian chief executive Jeff Connolly.

Speaking at a Committee for Economic Development of Australia lunch today, Mr Connolly said about 75 million jobs globally would be lost by 2022 because of the impact of artificial intelligence.

But 133 million new jobs would be created, he said.

That means there will be a huge amount of churn in employment.

Industry 4.0 is the jargon used to refer to the ongoing take up of AI, big data and machine learning, and its impact on the economy.

“It's not something where you can leave them out; you have to include them in the dialogue from day zero.

“The Australian Manufacturing Workers' Union is in (the taskforce) and helping to design and convince certain sectors of education that it’s ok to change the way we do education.”

He said it was a maturity test to see if Australia was ready for such a dialogue, while failure would be catastrophic.

“We have to do this jointly, the consequences are too great,” Mr Connolly said.

Resolute Mining chief executive John Welborn said he expected the use of full automation at the company’s Syama underground gold mine in Mali would bring huge benefits in competitiveness.

He said it reduced all in sustaining costs per ounce by about $US130, with ore moving from the mine face to the rom pad without any manual labour.

“It allows you to have a smaller fleet, saving on capital.”

Mr Welborn was confident that the rise of automation would not mean fewer jobs.

“If I wanted to go to Steve's Hotel, I had to ask my mother who was in her 50s to record LA Law on a VHS video recorder.

“She would have to look at an instruction booklet the size of a phone book and still I would come home on Friday and find that I was watching Four Corners.

“My mother is now in her 80s, and she texts me, she surfs the internet she’s on Instagram … not because of the instruction booklet but because it's (now) really easy to use.

That meant being able to more easily train the local workforce in Africa to oversee operations, while the company’s higher skilled staff in Perth could be leveraged across more operations, Mr Welborn said.