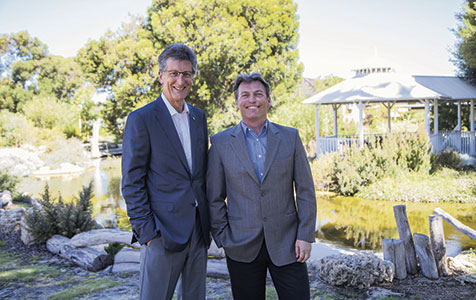 The first trial rollout of the federal government’s National Disability and Insurance Scheme next July has prompted Rocky Bay to increase its focus on selling services to recipients, rather than relationships with state and federal funding agencies.

Mr McHarrie, who joined the board last year, told Business News the market was going to become much more competitive and Rocky Bay needed to improve its corporate governance.

“Rocky Bay is in a good position, but what it is about to experience is a very different era,” Mr McHarrie said.

“We need to be agile enough to deal with a more corporate world, even though it’s a not for profit it needs to operate like a corporate.”

Mr McHarrie left Deloitte in 2011 but has continued his involvement in corporate governance, including being appointed to the board of the International Centre for Radio Astronomy – a joint venture between Curtin University and the University of Western Australia.

He took over the chair from Rob Gray, who stepped down as chairman after five years in the role and remains on the board.

Mr McHarrie said his focus as the incoming chair of Rocky Bay was to use his understanding of governance to ensure Rocky Bay set out on the right path.

That included devising the right messaging and branding to ensure Rocky Bay’s voice was heard in a competitive environment.

In the 2012-13 financial year, Rocky Bay has focused heavily on its visibility in the market and took the decision to employ a new marketing team to refresh the brand and appear more customer-focused.

It has since launched a new website and refreshed brand, which chief executive Michael Tait said was more customer friendly.

Mr Tait told Business News the organisation (and the disability services sector as a whole) found itself in an precarious situation due to the lack of funding certainty.

Both the federal government’s NDIS scheme and the state government’s My Way scheme will be trialled in WA next year; and both are likely to affect Rocky Bay clients.

Mr Tait said the state government had committed to funding recipients in advance, rather than Rocky Bay bearing the cost and lodging retrospective invoices, which made the situation easier.

But he said the same forethought hadn’t been given to how the trial of the NDIS scheme was going to work.

“At this point in time I would argue that the feds don’t know what they’re going to do with the roll out in WA,” Mr Tait said.

“They just started the rollouts in the eastern states, which were rushed anyway, and I think there’s so much trial happening in that space that they’ve given limited thought to what’s going to happen in WA.”

Despite the uncertainty, Mr Tai said the state government had been supportive and understanding.

“Time is on our side and the state government has made a lot of effort to ensure that we’re taken on the journey and not panicked in the process,” he said.