The City of Rockingham’s push for higher-density development along its coastal and CBD precincts is starting to pay dividends, with more than $100 million in residential projects under construction or approved to be built, which will collectively add more than 600 apartments, as well as two hotels. 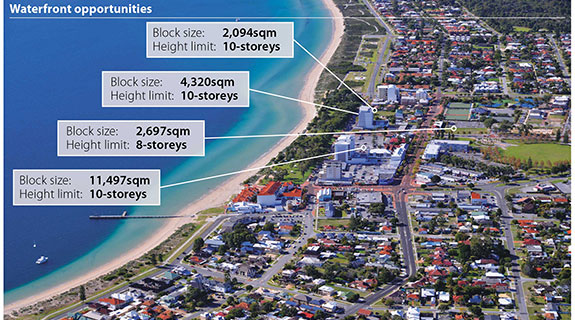 The City of Rockingham’s push for higher-density development along its coastal and CBD precincts is starting to pay dividends, with more than $100 million in residential projects under construction or approved to be built, which will collectively add more than 600 apartments, as well as two hotels.

Midway through last year, the council launched an economic development strategy for its waterfront, relaxing height limits to allow up to 10 storeys in key precincts, while also concentrating on community facilities like an ocean pool, alfresco dining and enhanced streetscapes.

Four significant projects have started construction since the release of that strategy, the largest being a $16 million, 76-apartment project over six levels named Capri, by Diploma Group, near Flinders Lane.

Diploma expects Capri to contribute to its earnings in the 2016 financial year.

Diploma is also building a 48-unit Quest Serviced Apartments hotel on Flinders Lane, due for completion in June, which it recently sold to a private investor along with another Quest property on Adelaide Terrace for a combined $63.5 million.

Along with the two Diploma projects, Taurus Homes is building a 20-unit project at 38 Lakes Street, while a $4.2 million, 32-apartment project is also being built at 2 Roscoe Turn, by private developer JLV Australia.

Six projects totalling around $11.5 million and collectively comprising 68 units are also approved for construction in the waterfront area, two by Nicheliving, another by Resolute Construction, while private equity fund Estesian Capital is the developer behind another of the projects.

Nicheliving director of sales and marketing Ronnie Elhaj said the company was selling one of the Rockingham projects on behalf of another developer, but its own development, a 24-unit, three level building at 102 Kent Street, sold out around three weeks after marketing was launched.

Mr Elhaj said Nicheliving would be looking closely at further opportunities in the Rockingham area, depending on the acquisition price, while the council had identified four prime vacant sites earmarked for high-density projects, three of which will allow for 10-storey buildings.

“The key point here is affordability; once you exceed a certain price point, you really limit the market,” Mr Elhaj said.

“It’s a price-sensitive market at the moment so it needs to be good value.”

Rockingham’s CBD is something of a development hub, with projects collectively worth around $65 million – set to provide 448 apartments and a 54-room hotel – either under construction or in the planning phase.

The 75-hectare project will provide 500 boat pens, complete with stacking facilities, hospitality components, including a hotel, cafes and restaurants, as well as a significant amount of residential development.

Cedar Woods managing director Paul Sadleir said the Rockingham council had paved the way for developers to fill in its vision for the redevelopment of the area.

“They’ve done a good job in beautifying the waterfront and putting in the planning framework, and Mangles Bay is very much in that same category,” Mr Sadleir said.

“When we get started we’ll have had lots of community consultation and good council support.

“It will be a 10-year project, it won’t happen overnight, but we see Rockingham as a strong growth corridor, it’s consistently in the top 10 fastest-growing municipalities, it’s got lots going on there and we’re pleased to be part of it.”