Road respect needs to be earned

There’s no doubt that cyclists and car drivers could do more to improve relations. 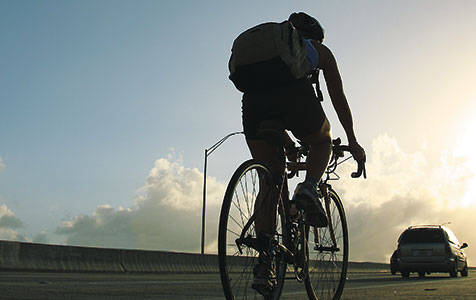 GIVE AND TAKE: A little respect both ways would help ease tensions on our roads.

There’s no doubt that cyclists and car drivers could do more to improve relations.

The shift to winter presents a number of issues for those of us who travel to work, depending on the choice of transportation.

Changeable and often-hazardous road conditions confront those of us who drive on the freeways, major thoroughfares and backstreets of our city.

But if the daily commute is a challenge for those of us in cars, how much more so for bicycle riders?

As I was driving home on one occasion last week I noticed how conditions had deteriorated for the bike riders who were sharing the roads with me; it was dark and wet and, therefore, pretty dangerous. So I was surprised at some of the risks being taken by some of the riders.

I have a lot of sympathy for bike riders. For instance, all of my family ride bikes for fun or commuting on a regular basis. I also know a lot of people, including many business leaders, who cycle as a key form of leisure and tell of the odd bingle, sometimes involving cars, sometimes involving steel poles that they just didn’t notice.

I accept that cycling is a growing form of transport and exercise for which room must be made, sensibly. No-one wants injury or death to occur because of carelessness from any party on the roads as we all learn to deal with more crowded space in an ever-busier city.

Bikes have a place, along with public transport, in helping alleviate congested roads. That they offer health benefits to those who saddle up is an added bonus.

However, I don’t buy the ‘saving planet line’ that allows some cyclists to project a sense of higher self-worth than others in the overall mix of traffic.

And I am cautious about cyclist interest groups pushing to shift more responsibility for their safety onto car drivers, including creating a virtual cone of protection that dictates drivers must allow them one metre of space when passing.

As a result I have started to question the moral superiority that cyclists employ in their cause to reshape motoring to better suit themselves.

Perhaps if they want car drivers to change their behaviour they ought to think about amending their own.

Imagine what would happen if car drivers: ran red lights; failed to indicate; didn’t bother to turn on their lights after dark; used the footpath when it suited them; and ignored many other basic road rules.

I’m not saying every cyclist does all the naughty things I’ve just mentioned (and acknowledge some drivers transgress these boundaries, too). I also appreciate that sometimes cyclists have very safe reasons for doing something, even if it is technically breaking the law. Nevertheless, it is a law, like jaywalking, until parliament decides to change that.

And yes, most bike riders have a car and a job, so they generally pay some of the taxes a driver pays, but not all they would if it was a user-pays system. As for safety habits, I remain stunned as to how many riders are commuting at dusk or in the dark without lights, and how many simply fail to stick their hand out to let drivers know they are turning.

I have also recently returned from a holiday in France. I have fond memories of spending several months cycling around that part of Europe more than two decades ago. While other parts of Europe have much in the way of infrastructure and special rules dedicated to cycling, France has tended to leave the roads alone and make the drivers more aware.

I could not imagine a safer place to cycle on a main road. It’s no wonder the French host the world’s premier grand tour, the Tour de France.

Then again, I can’t imagine a cyclist in France taking as many risks as some I’ve seen on our streets lately.

The French system relies not on rules and separation, but on everyone recognising their place on the road.