The state government’s freight strategy will see big changes, from Fremantle in the west to Kalgoorlie in the east and many stops in between. 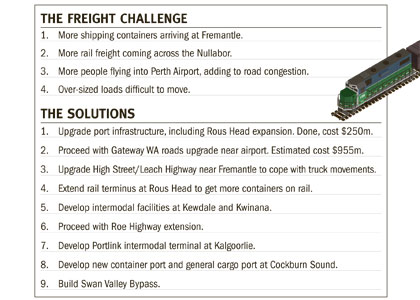 The state government’s freight strategy will see big changes, from Fremantle in the west to Kalgoorlie in the east and many stops in between.

The Fremantle port authority expects to start leasing land at Rous Head this year and says the move will help it cope with an expected doubling of freight volumes through the harbour.

The continued growth in container trade at Fremantle, averaging 8.3 per cent a year since 1990, has created major logistical challenges, not the least of which is dealing with increased truck movements through neighbouring suburbs.

That spills over to other parts of Perth, particularly around Kewdale and Forrestfield, where the $1 billion Gateway WA roads upgrade is set to proceed this year, to help ease congestion.

One of the long-term solutions to Perth’s freight challenge will be the development of new port facilities in the ‘outer harbour’ at Cockburn Sound.

That will be needed by the end of the decade, when the ‘inner harbour’ at Fremantle is likely to reach capacity, but in the meantime there are plenty of other changes that will be required.

These include upgrades to both road and rail infrastructure around Fremantle and the potential development of the Portlink intermodal terminal at Kalgoorlie, which is designed to divert interstate freight away from Perth.

Full details of the state government’s plans will follow completion of its metropolitan freight and intermodal strategy, due later this year.

Another key input into planning will be the WA Planning Commission’s review of options for the outer harbour, where private consortium James Point Pty Ltd and Fremantle Ports have put forward competing proposals.

Fremantle Ports chief executive Chris Leatt-Hayter believes there is plenty of scope for further growth at the inner harbour, which is expected to handle about 650,000 TEUs (standard container units) this financial year.

“We believe we’re at about one-half capacity,” he told WA Business News.

“Capacity is about 1.2 million (TEUs) and maybe a bit more and that will largely depend on the land transport.”

Assuming historic growth rates continue, that means the inner harbour will reach capacity in “2020 or thereabouts”.

Mr Leatt-Hayter said this was later than some earlier predictions, largely because of the impact of the GFC.

“The GFC actually had a dramatic impact,” he said. “It basically took about two years out of the growth.”

The new land at Rous Head will be critical to the port’s operations. Using spoil from its recent dredging program, the port authority has created an extra 27 hectares, which equates to a 20 per cent increase in available land at Rous Head and North Quay.

The port authority is being very choosy about who will get the land allocations.

“We’re going through a very rigorous process for selecting who those tenants will be, to make sure we continue to have improvements in transport logistics practices.”

The new Rous Head developments will build on work being done by the port operations taskforce, which is charged with making the whole supply chain more efficient.

It is focused on detailed matters like booking systems, information sharing, and aligning working hours to try and extract more efficiency gains.

Another feature of the new port development will be a longer, 690-metre rail terminus, which will allow more efficient loading and unloading of containers and help make rail a more competitive option compared to trucking.

In tandem with this project, the state government is currently conducting a tender process to select a new operator of the port rail service.

The government’s longer-term goal has been to get 30 per cent of port freight on to rail but this remains a distant prospect.

Over the past six months, the port says the proportion of freight moved by rail has been about 13 per cent, but also acknowledged the figure jumps around.

The long-term solution is likely to include the development of new intermodal terminals in the Kewdale-Forrestfield area and at Kwinana. These would provide inland sites for trucking operators to pick up and deliver containers, as well as storage for empty containers.

In the interim, the government is proceeding with planning for several big road upgrades between Fremantle and the Kewdale-Forrestfield area.

The $955 million Gateway WA project is designed to improve major intersections of Roe, Tonkin and Leach highways, with a series of flyovers and other upgrades.

With financial support from Canberra, the state government is planning to call for expressions of interest this year, with a view to starting construction in 2014.

There has been much less progress on two other road projects – the upgrade of High Street and Leach Highway near Fremantle and the westward extension of Roe Highway, from the Kwinana Freeway to Stock Road.

Both projects have become the subject of concerted opposition by community and environmental groups.

While these projects are designed to better cope with freight in the metropolitan area, another project aims to stop freight reaching Perth.

The PortLink inland freight corridor development plan involves construction of an intermodal terminal at Kalgoorlie, realignment of the railway in Kalgoorlie and sealing the road link between Wiluna and Meekatharra.

The state and federal governments have collectively committed $7 million to start the project’s planning phase.

Announcing the study last month, regional development minister Brendon Grylls said WA’s rapid growth “has led to increases in freight from the eastern states and an almost total dependence on Perth as a distribution point”.

Mr Grylls said the aim of PortLink was to provide a regional alternative to Perth as the central distribution point for interstate general freight.

“The PortLink concept ultimately links Port Hedland, Kalgoorlie-Boulder, Esperance and Geraldton and has the potential to build a more robust and flexible freight network that will deliver economic development and employment opportunities in regional areas.”

A future phase of the PortLink project would examine the feasibility of linking the existing Kalgoorlie-Wiluna standard gauge rail into the Mid West and Pilbara network.

Transport minister Troy Buswell said the PortLink project would build on the regional freight transport network plan, currently being finalised by the Department of Transport.

Closer to Perth, another development in the works is the Swan Valley bypass, which will be part of the Perth-Darwin national highway.