Riveting TV no mystery, Butler did it

Harry Butler changed thinking in this state and should be long remembered for it. 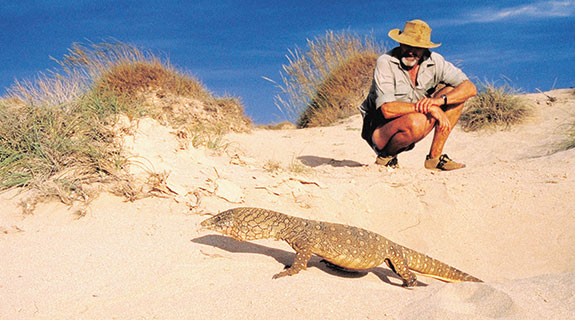 Harry Butler changed thinking in this state and should be long remembered for it.

While the hype driven by the latest Star Wars movie has been as over the top as you would expect from Hollywood, perhaps the most ridiculous suggestion by various commentators has been the idea that the 1970s original blockbuster influenced the thinking of a generation.

Such nonsense is even more pronounced in a week when someone as truly influential as naturalist Harry Butler died.

I was a locally born and bred child growing up in the 1970s, and a fan of both the Star Wars movie and Harry Butler’s In the Wild television series on Australian wildlife, so I feel as well qualified as any to voice an opinion on this matter.

If you were a kid in Western Australia back then, Star Wars was a great movie that set a new benchmark in animation and cinematography but In the Wild made us think about how we behaved in our own environment.

No-one I know has become an intergalactic smuggler or any form of mystical knight, but many of my generation learned to be inquisitive about nature in a way that satisfied our curiosity while minimising our impact on the environment. I certainly did.

The amazing influence of In the Wild is even more marked when you realise just 26 episodes of this low-budget series were ever made, not that many more than in the multi-million dollar blockbusters in the Star Wars franchise.

One of my strongest childhood memories is seeing Mr Butler in the flesh at Yanchep as he traipsed us through the bush, lifting rocks to find wildlife before carefully relocating anything he found in a condition as close as could be to how he found them.

It was, apart from several visits to the WA Cricket Association ground with autograph book in hand, my first brush with celebrity. Star struck or not, I remember the lessons of that day and his television shows – that we ought to tread lightly where we can.

It was a different message than that of today’s conservationists who don’t want us to leave even a footprint. But they didn’t really like Mr Butler anyway who, unlike almost anyone in following generations, came from an era when he had, quite literally, had to live off the land.

For those looking back with modern green-tinted glasses, Mr Butler had been too compromising, in their view, in agreeing to progress and working with industry, such as Chevron on Barrow Island and as a paid champion of the aborted Franklin River hydroelectricity scheme in Tasmania.

It’s perhaps a little ironic that, as a man with a sceptical view about human-induced climate change, he was shouted down all those decades ago for promoting hydropower, a source of electricity now widely utilised in Tasmania that makes it far more carbon friendly than any other Australian state.

One of the great pities, in my view, was that Mr Butler did not go on with his show. Perhaps he was more private than his television persona suggested, because he really did disappear from the limelight not that long after being named Australian of the Year in 1979 and failed to have that enduring presence of other public naturalists such as David Attenborough, to whom he was often compared.

A further irony was that, despite a tough upbringing and far less scientific knowledge of the species he handled (often because he discovered them), Mr Butler was a victim of cancer at the age of 85, outliving his far younger successor in the television landscape, Steve Irwin, who died at the hands of the wildlife he loved.

If it was up to me, Mr Butler would have a tombstone set in such a way that you’d have to lift it to read who he was, and afterwards set it back carefully in order to leave the wildlife underneath as undisturbed as possible.

MAY the festive season be a wonderful time for all Business News readers, notwithstanding the difficult economic times that many in this state have encountered.

Unfortunately, job losses and company failures have continued in the latter part of the year as the new economic reality has overcome many optimistic business people who were holding out for some improvement.

I have to say I was extremely positive around August and September that the economy had bottomed and all that remained was for business to remain resilient, with better times just around the corner.

Such thinking was premature and, regrettably, the resources sector has suffered further, while other industries such as housing construction now face an equally rapid slow down.

So 2016 will be a testing time for WA’s traditional industries. Thankfully, the business leaders of this state have a history of nimbleness and resourcefulness, which, I believe, will see us manage our way through to become a lot stronger as a result.