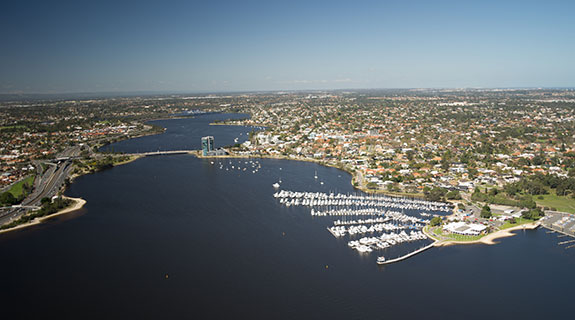 EMERGING: The first wave of potential projects at Canning Bridge.

Developers are steadily advancing plans for the first wave of major apartment projects around Canning Bridge, with the buildings to take advantage of new planning guidelines for the area expected to be adopted in coming months.

The latest project, which is in the planning phase, is a $150 million, 220-apartment development by Subiaco-based Stirling Capital, located on The Esplanade, across the road from the Swan River Rowing Club.

The proposal, designed by McDonald Jones Architects, comprises two buildings to be built in separate stages, each between 15 and 20 storeys, linked by a podium level.

The developer, which declined to comment when contacted by Business News, is in the process of finalising its development application for the project, which will be lodged once a precinct plan released for public comment in October is approved.

Once the Western Australian Planning Commission approves the structure plan, developers are expected to hasten to capitalise on the new planning guidelines, which will allow for the construction of buildings up to 20 storeys in key precincts.

To cater for the expected influx of residents, the Canning Bridge train station will be upgraded to include an expanded bus station, while the plan also proposes a new traffic bridge and a ferry station integrated with the bus and rail interchange.

Mr Norup said detailed design work was also under way for a much larger development – the $250 million, 20-storey Precinct on Canning, which will be pitched at the upper end of the market and include a significant retail and hospitality component.

“They are discerning clients that are used to a level of luxury and living.

“As far as competition goes, the apartments will be similar, but it’s going to be about the facilities, and what’s in the building.

“It’s not just buying a box off the plan; it’s having those features built in.”

While not predicting a rush of activity, Mr Norup said he expected Precinct on Canning and Stirling Capital’s proposal would act as catalysts for a second wave of significant projects in the area.

“The problem with a lot of the sites is there are longer-term leases on the sites,” he said.

“There are a lot of sites ripe for development but a lot of the buildings along Canning Highway are commercial spaces and you’re really governed by the length of the longest lease in your building.

“But once these first towers are done, it will be easier for the second wave of developers because people will see the buildings that are up and will be able to look at the amenity that they’ve provided.”

Also in close proximity to the redevelopment area, Mark Hay Realty is planning to start construction in April on its $20 million project, The Gardens, a little further down the road at 554 Canning Highway.

Developer Mark Hay said his company was evaluating further development opportunities close to Canning Bridge, but was unable to give any more details at this time.

However, he did say that the Canning Bridge precinct was looming as one of Perth’s next big urban infill opportunities, despite the draft plan identifying limitations to the current infrastructure’s ability to support large-scale development.

“The cost of going to sprawled areas and putting in new infrastructure as opposed to upgrading infrastructure, an area that’s so close to the city has to be more efficient,” Mr Hay said.