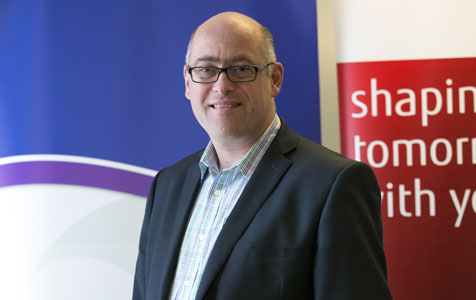 DOWN TO THE WIRE: Trident’s Mark de Kock says there can only be one winner in the competition to build the second fibre telecommunications cable from Perth to Singapore.

Three companies are in the running to build the second submarine telecommunications cable connecting Western Australia with international networks.

Recently formed Trident Subsea Cable is up against SubPartners and Nextgen Networks subsidiary Australia-Singapore Cable, with all three planning to have their version of the telecommunications cable constructed and ready for service between the end of 2014 and mid-2015.

But according to Trident chief executive Mark de Kock only one will actually go ahead – and that will be whichever starts building first.

The keys to that are securing sufficient funding commitments, business partnerships and, importantly, contracts with users.

“There’s really only a business case for one of these cables being built, so there’s a very strong first-mover advantage scenario,” Mr de Kock told Business News.

“The first company to start constructing the cable will get most of the business, and it’s unlikely that a second new cable will be constructed; the commercial returns just won’t be there for a second cable system.”

Trident is the most recent of the three companies to put its proposal to the market. To enhance its credentials it is also spruiking major advantages for the Pilbara and the growing oil and gas sector in particular.

As well as the submarine cable between Perth and Singapore via Jakarta, Trident is planning to construct a terrestrial fibre network from Perth up to Karratha via Onslow, which will account for $70 million of the total $400 million cost.

Fujistu has signed on as Trident’s partner for designing and building the terrestrial network, and is in the running for the submarine construction contract.

Only Telstra currently offers fibre services in the Pilbara, which Mr de Kock said was inadequate infrastructure to underpin the region’s growth.

“The people up in the Pilbara have been complaining for a long time about telecommunication services, the lack of variety in competition and resilience of the network up there,” he said.

“About 5 per cent of Australia’s GDP gets produced in the Pilbara, and they’re very important not only to the state but to the country as well – to be constrained by telecommunications is somewhat bizarre.”

Mr de Kock said the need for a submarine cable from Perth to Singapore was growing as the existing SeaMeWe 3 cable, which is 13 years old, is nearing capacity.

“Growth in demand for international internet capacity has been about 50 to 60 per cent per annum over the last 10 years, and that’s not going to slow down,” he said.

“Having a cable here that nearly has its capacity used up means that there’s a need for a new cable to underpin that growth.”

Trident is planning to begin construction on the submarine cable in January 2014, with completion expected in July 2015.

Australia-Singapore Cable (ASC) is also working to a similar schedule.

The Nextgen Networks subsidiary – formerly owned by Leighton Telecommunications – has been in the game the longest with plans first mooted in 2010 and an initial planned completion date for this year.

Obtaining necessary approvals appears to have delayed the $200 million project, with negotiations still under way for permits and a revised completion date of early 2015.

“However, the customer demand for this cable is, and has always been strong. We remain pleased with our progress and are at least 12 months ahead of any proposed cable on this route and that is a significant advantage,” Mr Shaw said.

ASC has signed up Alcatel-Lucent as its construction partner and is confident it can source capital for the project, including the potential for investment from new major Nextgen Networks shareholder the Ontario Teachers’ Pension Plan.

Trident has secured 80 per cent funding amounting to about $320 million from Chinese company The Beijing Construction and Engineering Group, which will become available once presale customers are signed and a proposed construction contract finalised.

It’s expected the remaining capital costs will be covered by private equity investors, who may also be international telcos looking for presold capacity.

Mr de Kock said his company had a significant advantage over competitors.

“Getting the Indonesian regulatory approvals and permits is perhaps the hardest part of the Perth to Singapore route,” he said.

To circumvent that challenge Trident has struck a strategic partnership with existing Indonesian fibre operator Matrix Systems, including buying part of its network, thus removing the need to obtain Indonesian approvals.

Founder of data centre operator NEXTDC and co-founder of metropolitan fibre network provider PIPE Networks, Bevan Slattery, is behind the third company wanting to snare business in the submarine market.

SubPartners was formed in 2010 with the intention to invest $450 million in Asia Pacific subsea telecommunications cable infrastructure, including building the APX-West link from Perth to Singapore via Jakarta.

The company has the weight of Telstra behind its proposal with a memorandum of understanding signed with the telco for it to be an anchoring customer.

Under the deal, Telstra would be looking to acquire a segment of the Perth to Singapore fibre link for its sole use.

SubPartners has been actively looking to secure presale customers with another “major Asia Pacific telecommunications provider” registering its intention to buy part of the network if it goes live.

Mr Slattery is planning to have the fibre cable ready for commercial use by late 2014 and the company is working through obtaining necessary approvals.

According to the company’s website, progress in obtaining Australian permits is at 35 per cent, Singapore permitting is 20 per cent complete, while progress of getting approval from Indonesian authorities is only 15 per cent complete.