The number of hotel rooms in Perth is set to grow by at least 1,400 over the next three years after three major developments were confirmed this week. 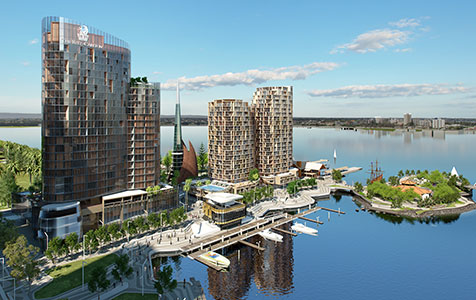 TOP-LEVEL: An artist’s impression of the proposed Ritz-Carlton hotel at Elizabeth Quay.

The number of hotel rooms in Perth is set to grow by at least 1,400 over the next three years after three major developments were confirmed this week.

This will go some way to achieving the goal of the state government’s strategic tourism plan, which calls for 1,900 new rooms by 2020.

Business News has compiled a list of six hotel developments almost certain to go ahead.

They include the Ritz Carlton, Crown Towers, and a Rivervale hotel BGC is building, which all made announcements this week.

Ritz Carlton confirmed it would build a luxury hotel at Elizabeth Quay, while Crown Resorts’ project is back on track after a hiatus due to an unlawful development approval claim in the Supreme Court, which was dismissed last Wednesday.

BGC announced its hotel in Rivervale would be the first hotel in Australia to carry Starwood Hotels' Aloft brand.

Construction has started at the Old Treasury hotel by FJM Property, which is part of a larger development and is looking for a new hotel operator after parting ways with Aman Resorts.

The smallest planned hotel is Hotel Alex Perth in Northbridge, which will have 74 rooms, and is a boutique development by the team behind Little Creatures Brewery.

There are a number of proposed hotel developments in the pipeline, but those not included in Business News’ tally are yet to name an operator, submit detailed building plans or begin construction.

Those projects include a hotel slated to be Perth’s tallest, standing at 40 levels.

The project, which has been linked to Singaporean hotel group Amara, has approval for 226 rooms to be built at 190 Adelaide Terrace in East Perth.

A hotel development at 500 Hay Street in Subiaco is now in the design phase, and developer Dradgin Pte is in negotiations to choose a hotel operator for the 217-room hotel at the Ace Cinema site.

A 118-room hotel planned for Wellington Street, called The Oaks, is also believed to be progressing past the development approval stage.

An 18-storey, 247-room hotel on Barrack Square has received Metropolitan Redevelopment Authority approval, but still requires approval from the Swan River Trust, due to its location.

Business News understands the new private developers who took over from Diploma Group will make an announcement about the hotel project at 69 Adelaide Terrace in the near future.