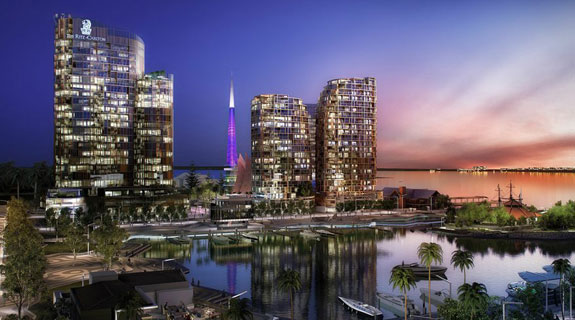 The Ritz-Carlton is considered the flagship development of Elizabeth Quay.

Perth’s Ritz-Carlton hotel is a step closer to being built, with the City of Perth approving it, along with two mammoth apartment towers at Kings Square, overnight.

“Perth as we know it is changing, our skyline is changing and with all the new developments or projects either planned or under way the experience of Perth will undoubtedly change for the better,” Ms Scaffidi said.

Business News recently reported that the Ritz-Carlton job would result in keen competition among the state’s top building and construction companies, with developer Far East Consortium expected to name a contractor before the middle of the year.

The City of Perth also approved a $1.5 million single storey kiosk to be built at Elizabeth Quay.

Meanwhile, the City of Perth has given its tick of approval to a $190 million apartment development at Kings Square, comprising two buildings, at 43 and 49 storeys.

The towers will be built on a site owned by Seven Entertainment, a subsidiary of Seven Group Holdings.

A total of 563 apartments will be built in the two buildings, slated for the heart of the Kings Square redevelopment, part of the Perth City Link. An artist's impression of the Kings Square towers.

Ms Scaffidi said the City of Perth would now focus on ensuring the amenity of the CBD will be able to accommodate the demands of the new precincts.

“Together with the state government we are undertaking and planning for a number of traffic, transport and street enhancement projects that will improve the accessibility and friendliness of our city streets and spaces,” Ms Scaffidi said.

“Whether it is installing more cycle paths, improving pedestrian crossings, or two-way traffic conversions, our goal is to prepare our city for its bright future and to continue to shape Perth as a world class city.”