RISING office rents in the Perth CBD are prompting a change in the city's tenant profile, with a number of companies relocating after rent reviews, and others pushed out of the city into fringe suburbs. 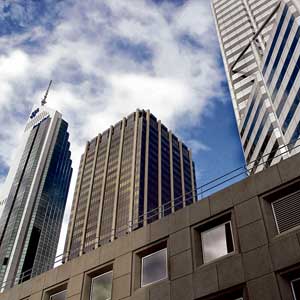 MOVING ON-Some tenants in the CBD are relocating to other buildings or suburban areas, as rents continue to rise and demand for space remains strong

RISING office rents in the Perth CBD are prompting a change in the city's tenant profile, with a number of companies relocating after rent reviews, and others pushed out of the city into fringe suburbs.

In premium building QV1, former tenant Thai Airways relocated this week to St Martins Tower, while Concorde Travel and Hess Exploration will both move out in mid-November.

The latter has taken up a lease in Allendale Square.

Fellow tenant Microsoft is also looking for new offices, with its lease due to expire at the end of next year.

Another software firm, Sydney-based Computer Associates, will move from its full floor office at 256 St Georges Terrace in December, to a new two-storey building in Applecross.

WA manager David Thomas said the company had faced a four-fold increase in rent at its current premises, which had been a significant factor in its decision to relocate.

PearlStreet managing director Anthony Wooles said the company planned to retain its executive team in the CBD, although it would reduce the size of its offices by about 50 per cent.

He said the company's rent would have doubled if it had accepted the rent review.

Recruitment firm Energy Resourcing Australia has taken up the space vacated by PearlStreet, having moved from State One House, where net rents have climbed to more than $700/square metre.

With strong demand for office space and little new supply due in the near future - most of which is pre-committed - the pressure on tenants is expected to increase.

Jackson McDonald chairman of partners Graham Goerke said while the firm hadn't seen a large number of companies struggling to meet their rent reviews, he believed it was likely in future due to the changing financial climate.

Mr Goerke said it was more common for tenants to have missed their deadline for a rent renewal.

"We've seen smaller tenants that haven't been managing their leases as well as they should have that have missed deadlines for options on their lease, and the owner has not been prepared to grant them a further term," he said.

The highest prime grade leasing deal to be struck this year was for a 500/sqm half-floor in Exchange Plaza, signed at $935/sqm.

However, A-grade rents have matched the climb, with one floor of the Quadrant building recently signed for the same amount.

Jones Lang LaSalle national leasing director David Evans said rents in premium buildings were expected to rise slightly in the coming months, nudging the $1,000/sqm mark, as tenants relocated to new office space and more premium areas became available. However, he said any increase would be at a slower rate than the previous year.

"We're starting to see a softening in demand and a slowdown in decision-making, although not necessarily a softening in rents," Mr Evans told WA Business News.

"My opinion is that rents will not continue the same rapid rate of growth of the past few years. It's likely to flatten out, but we won't necessarily see a decline."

Mr Evans said the impact of the global financial crisis on some of the city's proposed office towers would dampen supply, putting further pressure on demand.

"[Projects] that have not started construction probably won't happen, so even though demand has come off, the supply side isn't there."