Another former high-profile politician has found employment in the business world. 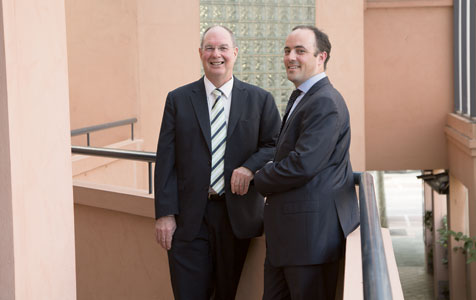 Another former high-profile politician has found employment in the business world.

Mr Everingham said the appointment was in line with the firm’s bipartisan political business model.

“I jumped at the chance, first and foremost because he is respected by all sides of politics,” Mr Everingham told Business News.

Mr Ripper, who retired from politics at the March state election, will succeed another prominent Labor figure, John Dawkins.

“I’ve had some months of resting, reading books, going to music festivals; now that I feel refreshed, I’ve put my hand up looking around for things I might do,” Mr Ripper said.

He said he had dealt with GRA Everingham when in government, as treasurer and state development minister.

“That was when I met the firm and its people, I had respect for the way in which the firm performed on those occasions,” Mr Ripper said.

“I’ll mainly be working on the client side and working with staff; I’ll be providing strategic advice and mentoring the staff.”

Mr Ripper intends to officially register as a lobbyist, even though he does not anticipate engaging directly in lobbying activities.

“Nonetheless, it’s a government relations firm, I’m the chairman of the board, and to be sure, I should register.”

Mrs Edwardes was previously a partner at law firm Holman Fenwick Willan, and prior to that was an executive general manager at Hancock Prospecting.

Both intend to provide advice to clients on dealing with government, and to help clients understand the government decision-making process, but neither is considered a lobbyist.

In particular, neither intends to make direct representations on behalf of clients or meet with government officials or ministers.

He has recently established Birney Corporate, which provides a range of government relations, investor relations and business management services.

Buru is working on several oil and gas projects in the Kimberley, with the most advanced being its Ungani oil field development near Broome.

The most notable politician to have taken a corporate role in recent years is former premier Alan Carpenter, who has a corporate affairs role at Wesfarmers.

Mr Ripper said there were still many myths surrounding lobbying, with a perception it involves “pulling secret strings”.

“There is plenty of scope to put arguments based on merit,” he said.

“There is a lot of common ground that can be found, and a lot of misunderstanding that can be overcome, by people who know what business wants, and know how government works.

“It is surprising the depth of misunderstanding between the corporate world and government. That’s where firms like GRA offer a valuable service.”

Mr Everingham started the WA firm in 2006, with national group Government Relations Australia taking a 49 per cent stake in 2008.

He said GRA would move to a majority ownership stake next year.

GRA’s bipartisan approach is illustrated by having Mr Dawkins, a minister in the Hawke and Keating governments, and former Howard government minister Helen Coonan as national co-chairs.