Rio Tinto’s logo will soon be installed on the highest vantage point in Perth’s CBD, a move that suggests the mining giant intends to remain at its current office accommodation and not seek to anchor a new building. 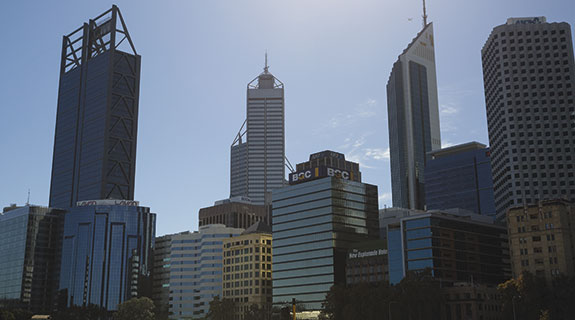 sign language: Signage is being swapped on the three tallest towers in Perth. Photo: Attila Csaszar

Rio Tinto’s logo will soon be installed on the highest vantage point in Perth’s CBD, a move that suggests the mining giant intends to remain at its current office accommodation and not seek to anchor a new building.

According to City of Perth building application documents, Rio Tinto will spend $400,000 on an illuminated sign for the top of Perth’s tallest building, the 51-storey Central Park.

Central Park, which is owned by Perron Group and Singapore’s Frasers Commercial Trust, has been without a naming rights tenant for about a year, following the removal of the St George Bank logo from the building.

Rio Tinto’s move has sparked speculation among industry sources that its probability of anchoring a new office tower, one of the stronger rumours in Perth in recent years, is greatly reduced. Rio Tinto’s name has been thrown up as a potential anchor tenant for a new office building to be built at lots five and six at Elizabeth Quay, following Canadian commercial landlord Brookfield Office Properties entering exclusive negotiations over the land with the state government late last year.

Speculation also emerged late last year that Rio Tinto was in line to anchor a second office tower at Bishop’s See, a proposal by owners Brookfield and Hawaiian that has been around since 2008.

But in an environment of cost cutting for the state’s biggest miners, it would seem unlikely Rio Tinto would spend $400,000 to put its name up in lights on a building it is expected to vacate in coming years.

However, another source, who spoke with Business News on condition of anonymity, said the signage on Central Park was not necessarily an indication of Rio Tinto’s intentions, rather it could simply be some ‘chest beating’ by the mining company seeking to underline its importance to Western Australia.

Business News understands Rio Tinto’s lease of 11 floors at Central Park will expire around 2018, with its 12-year lease initially signed by subsidiary Hamersley Iron in 2006.

Rio Tinto also has a significant presence at Perth Airport, taking up around 25,000 square metres of space across three buildings, including a purpose-built remote operations centre.

Inquiries to Rio Tinto by Business News had not been responded to at time of publication.

Also at Central Park, a leasing campaign by JLL for the top four floors of the building is ongoing, while a further five full floors are expected to be made available by the end of the year.

The podium level is also about to be vacant, with architecture firm Hassell moving to the historic Commonwealth Bank building at Forrest Place, under a deal brokered by JLL and Sheffield Property Group on behalf of building owner Primewest.

Meanwhile, BHP Billiton spin-off South32 is busy applying its mark to the city, with its logo being installed on the former Bankwest Tower at 108 St Georges Terrace.

BHP Billiton is also swapping its signage on Brookfield Place, replacing the sign that went up shortly after the building was completed in 2012 with a more energy efficient model.