Rio Tinto Ltd will sell its Kintyre uranium project in Western Australia to a joint venture consortium for $US495 million ($A520 million), as it moves closer to completing its $US10 billion ($A10.5 billion) asset sales target for this year.

Rio Tinto Ltd will sell its Kintyre uranium project in Western Australia to a joint venture consortium for $US495 million ($A520 million), as it moves closer to completing its $US10 billion ($A10.5 billion) asset sales target for this year.

The sale of the project to subsidiaries of Cameco Corporation and Mitsubishi Development Pty Ltd is expected to close in August.

"This sale brings us closer to achieving our asset sales target of $US10 billion in 2008, and is the third under a planned program to divest at least $US15 billion of assets in total," Rio Tinto chief financial officer Guy Elliott said in a statement.

"It illustrates our ability to obtain real value for our assets."

Cameco said the Kintyre project may host potential mineral deposits ranging from 62 to 80 million pounds U3O8 in total, with an average grade between 0.3% and 0.4% U3O8. It said these estimates are conceptual in nature.

Kintyre is located in the East Pilbara region of Western Australia, approximately 270km north-east of Newman and 90km south of Telfer, on the south-west margin of the Great Sandy Desert.

The transaction follows the sales earlier this year of the Greens Creek mine in Alaska for $US750 million and Rio Tinto's interest in the Cortez operation in Nevada for $US1.695 billion.

The finalisation of the transaction is subject to the satisfaction of customary conditions and certain agreements with the Martu People, the traditional owners of the land.

A Cameco statement is pasted below:

Cameco Corporation announced today that it has signed an agreement to acquire a 70% interest in the Kintyre uranium exploration project in Western Australia for $346.5 million (US).

A joint venture comprised of Cameco (70%) and Mitsubishi Development Pty Ltd (30%) purchased the Kintyre project from Rio Tinto for $495.0 million (US) through a bidding process. Cameco will operate the project and is funding its share of the purchase price through existing credit facilities. The transaction is expected to close in August subject to ministerial approval in Western Australia and execution of certain agreements with the Martu people who are the traditional owners of the land.

Kintyre is an advanced exploration project located in Western Australia about 1,250 kilometres northeast of Perth.

Based upon Cameco's due diligence, it is estimated that the Kintyre project may host potential mineral deposits ranging from 62 to 80 million pounds U3O8 in total, with an average grade between 0.3% and 0.4% U3O8. These estimates are conceptual in nature. The basis for these conceptual estimates includes 355 historical diamond drill holes totalling 70,279 metres. There has been insufficient exploration, however, to define a resource at the Kintyre project in compliance with Canadian mineral resource reporting standards. Although Cameco will be undertaking an exploration program with the objective of estimating a resource for the deposits, it is uncertain if further exploration will result in the target being delineated as a mineral resource.

Uranium was first discovered in the area in 1985 and followed up with extensive exploration that identified eight deposits. The project was placed in care and maintenance in 1988 when uranium prices declined below $12 per pound (US). The sale process was initiated by Rio Tinto in 2007.

"The Kintyre project is an ideal fit with Cameco's strategy to expand our base of quality uranium assets," said Cameco's president and CEO Jerry Grandey. "It adds potential for low-cost open pit production and further diversifies our uranium business geographically."

Upon closing, the joint venture will begin working toward a mine development agreement with the Martu. Cameco has experience working with traditional owners in Australia, including the Martu, through its ongoing exploration programs.

Cameco Corporation
Cameco, with its head office in Saskatoon, Saskatchewan, is the world's largest uranium producer. The company's uranium products are used to generate electricity in nuclear energy plants around the world, providing one of the cleanest sources of energy available today. Cameco's shares trade on the Toronto and New York stock exchanges. 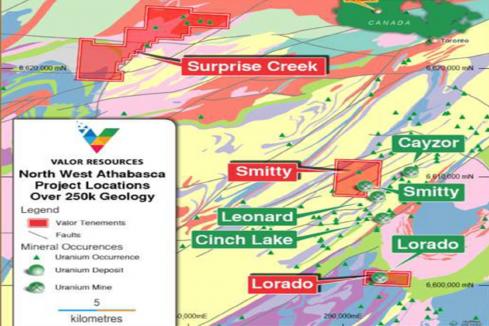