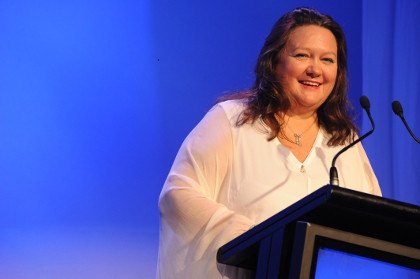 Australia’s richest woman Gina Rinehart has made a profit of about $60 million after selling her stake in diversified miner and contractor Mineral Resources.

The Hancock Prospecting chair has relinquished her 14.9 million shares at a time when the company share price was $10 apiece.

Mrs Rinehart's company acquired the shares at a price of $6.05, after signing an option agreement with Mineral Resources in 2008.

The agreement was for Mineral Resources to develop and operate the Balfour Downs manganese operation in the East Pilbara region of WA; mining, processing, transporting and shipping ore which was estimated to be 350,000 tonnes per annum.

In return, it granted Mrs Rinehart and the Hancock group 15 million unlisted options in three tranches at an exercise price of $6.05 each.

Selling the stake has enabled Mrs Rinehart to make about $60 million through the Mineral Resources venture.

Mineral Resources, which confirmed the sale of the Hancock shares late Friday, began work on the manganese project – renamed Nicholas Downs - in 2010.

Hancock Prospecting is currently seeking to gain about $7 billion debt funding to get its Roy Hill iron ore project off the ground.