Gina Rinehart has virtually ensured her family's long-held dream of operating its own iron ore mine, securing final funding for her massive Roy Hill project. 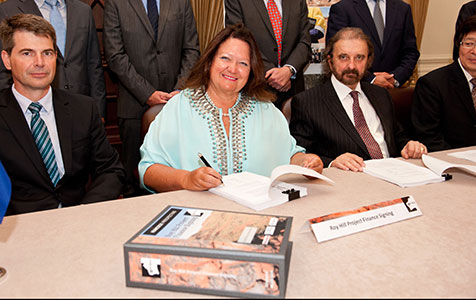 Gina Rinehart has virtually ensured her family's long-held dream of operating its own iron ore mine, securing final funding for her massive Roy Hill project.

Mrs Rinehart's Hancock Prospecting signed a $US7.2 billion ($A7.98 billion) funding package in Singapore on Thursday with an international consortium of 19 banks and five export credit agencies.

Roy Hill chief executive Barry Fitzgerald said the funding package was the biggest of its kind in the world.

"I am advised this is the largest ever project financing for the development of a land-based mining project worldwide," he said in a statement.

Mrs Rinehart said the $US10 billion project, which is already under construction, would employ up to 3,600 people during construction, and a further 2,000 staff once operations started.

The mine expects to export its first iron ore in 2015 and is targeting annual production of 55 million tonnes.

Mrs Rinehart said the mine, which is 70 per cent owned by Hancock Prospecting, would "significantly benefit our West Australian and national economy".

"We look forward to becoming a major iron ore producer on an international scale, and thank our partners for their steadfast support for this major Australian project," she said in a statement.

While Hancock Prospecting has a half share in the Rio Tinto-operated Hope Downs iron ore mine, Roy Hill will be its first majority owned and operated mine, something to which Mrs Rinehart’s father, Lang Hancock, aspired.

Allen & Overy acted as Australian and international counsel to the export credit agencies and commercial lenders.

The finance deal comes as iron ore prices slump and follows numerous media coverage about delays and feasibility concerns of attracting the debt.

It also marks more than a decade since the tenements for Roy Hill were acquired.

"The structure and quality of the project has allowed us to secure an internationally competitive cost-effective funding structure which can endure future market fluctuations," Mr Fitzgerald said.

"Roy Hill's continued pursuit of this project represents a substantial vote of confidence in the future of WA’s resources sector,” Mr Barnett said.

“This is great news for workers in mining and construction and shows there are still opportunities out there despite recent reports of a slowing of growth.”

Roy Hill has directly awarded more than $1.1 billion in contracts for creating an airport, mine camp accommodation and for works at the mine.

“CCI is pleased to be working with Roy Hill to reinvest in the WA economy by listing supply opportunities on CCI’s Project Connect website, where WA businesses can register their interest and capabilities," she said.

"The Industry Capability Network WA will then begin the process of vendor identification for packages of work.”