Fairfax under Gina Rinehart’s control would be a disaster. 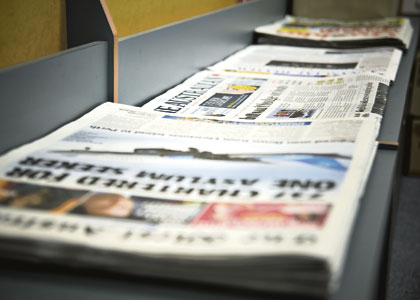 NEW PARADIGM: The changing media landscape will affect how newsagents and paper-delivery businesses go about their work. Photo: Grant Currall

Fairfax under Gina Rinehart’s control would be a disaster.

LIKE her or not, Gina Rinehart is entitled to buy as much of the Fairfax media business as she likes; she even has the right to destroy it, forfeiting the value of her investment.

Why she would waste her money in that way is another question, as is the matter of whether she is being fair to employees, or minority Fairfax shareholders, by seeking control without paying a ‘control premium’.

But whichever way Mrs Rinehart’s push for board seats and effective control of what was once a great publishing company is analysed, she is following the law as it stands.

More interesting than the legal and moral questions swirling around Australia’s richest person is the question of whether she knows what she is doing.

I’ve spent a few decades in the media business and, being an early subscriber to the new technologies that are revolutionising my trade, I suspect she hasn’t got a clue about news gathering, writing, or how a publishing company (paper or electronic) actually works.

That has been her formula in rebuilding ‘The House of Hancock’, as she likes to call the company she inherited from her father, the late Lang Hancock.

Hancock Prospecting, however, is a mining business. It discovers ore bodies and mines them. It is a business built on geology and made profitable thanks to low-cost, bulk-transport economics, and Asian demand for iron ore.

Success in mining has very little to do with the skills needed to succeed in media, such as marketing and people management, and it is in those areas that Mrs Rinehart’s media adventure will come tumbling down – just as it did for her father some 40 years ago.

Back in the 1970s, Hancock and his partner, Peter Wright, thought they could bend the debate in Western Australia in a more pro-mining direction and alter the views of the toughest politician of the day, Sir Charles Court, either when Court was industrial development minister, or later as premier.

They failed, for precisely the same reason Mrs Rinehart will fail with Fairfax.

The Sunday Independent newspaper produced by Wright and Hancock was awful. The daily Independent was even worse, lasting just a few weeks because it was done on the cheap, with no investment in design or content.

One personal example tells the story of why the Independent failed. Share sales at the Perth Stock Exchange in the early 1970s were painfully recorded by hand, first by exchange staff, and then by junior reporters (in pencil) who handed their work to a sub-editor, who passed it on to a printer. It was a labour-intensive (trust me on that one) and expensive process, which ultimately ended up in the next day’s paper.

Not so at the Independent. It simply took the raw stock exchange quote sheets, photocopied them and dropped them into a page at the back of the business section. It was much cheaper, but looked like it had been done at a kindergarten.

What Hancock did in the media, his daughter will repeat, if for no other reason than everything else she has done so far is a replica of her father’s style – a word used rather loosely.

Fairfax on Mrs Rinehart’s watch, if it gets that far, will be a disaster because of the vast difference between mining and the media. Simply writing this story requires a dash of creativity and imagination, with neither attribute rated highly in the House of Hancock.

There are other reasons why Mrs Rinehart will fail in the media, including the fruitless search she will have to make to find enough writers who share her view of the world, and the relentless assault on her by politicians and other publishers should she use Fairfax to promote her other business interests.

As for readers, they will disappear, closely followed by advertisers.

Will any of this unfortunate outlook affect Mrs Rinehart’s determination to get Fairfax, whatever the cost? Not at all. What she wants, she generally gets – just make sure you’re not standing between her and the prize she is seeking.

CHANGES in the media industry are not confined to the heavy cost cutting under way at big businesses such as Fairfax and News Corporation. Many smaller businesses are caught in the crossfire of the ‘new media versus old’ media fight.

Newsagents and paper delivery businesses, for example, will be feeling the squeeze caused by falling traffic as the paper-buying habit declines.

All retailers, of everything from cars to cans of baked beans, will have to figure out where to market their message. Journalism schools will find it harder to sell places in the courses they offer.

Politicians and public relations practitioners will have to re-think how they promote their clients or political party because they can no longer rely on a century-old system.

It is into this changing world that Mrs Rinehart is plunging, confident that she is buying Australia’s leading publisher of high-quality journalism – not knowing that her investment will turn to dust the minute she starts to shape it to reflect her personality.

Britain, which is showing signs of making a full exit from the disaster on the continent, is even dusting off plans to do more business with parts of the world that are growing, with Prime Minister David Cameron urging industry to get closer to China, India, Canada, and Australia.

It’s good advice, albeit 20 years late, because Britain today is heading for the mother-of-all-hangovers when the two jolly parties keeping the island afloat come to an end and the Queen’s diamond jubilee and the Olympics have been forgotten.

In place of the parties will come another of those ‘winters of our discontent’ as Brits discover that a country has to actually produce something the world wants, rather than live in a boozy time warp.

“A man can’t be too careful in the choice of his enemies.”