Rinehart fails to make the cut with BRW

Gina Rinehart’s omission from a BRW rich list is perplexing, considering the ‘self-made’ women who made the grade. 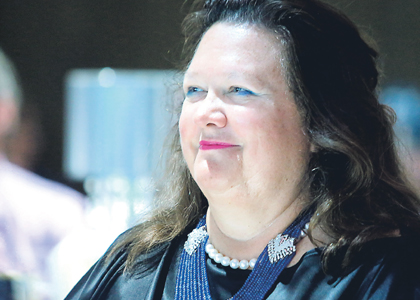 MAKING THE MOST OF IT: Gina Rinehart says she inherited a business empire deep in debt, despite the cash flow from royalties. Photo: Bohdan Warchomij

Gina Rinehart’s omission from a BRW rich list is perplexing, considering the ‘self-made’ women who made the grade.

WHEN BRW has a cover feature entitled ‘Rich Women - for the first time, we reveal Australia’s wealthiest women and how they made it’, you would have a sneaking suspicion that Gina Rinehart would be on that list; presumably at the top.

Mrs Rinehart is generally accepted to be Australia’s richest person, based on a host of mining-related assets. Forbes recently listed her as the 36 th richest person in the world, with a fortune worth $17 billion.

That wealth includes royalty streams from iron ore deposits discovered by her late father, Lang Hancock, which were developed by others and are now owned by Rio Tinto.

There is also the value of projects in which she has a far greater ownership that have progressed since her father’s death; including the operating Hope Downs mine, a 50-50 joint venture with Rio Tinto, and Roy Hill, which is still a long way from production.

Arguably, most of the wealth attributed to Mrs Rinehart involves the latter.

Mrs Rinehart herself has claimed that she inherited a business empire heavily indebted and in need of rescue, despite the cash flows from the royalties.

So BRW’s decision to omit Mrs Rinehart from its list is perplexing.

Perhaps the Western Australian iron ore magnate’s high-profile attempt to gain a boardroom seat at Fairfax, which owns BRW, might have led to the snub. After all, the money she has spent buying shares in Fairfax was more than the total wealth of most women on the magazine’s list.

Of course, BRW had a clause.

The headline inside was ‘Women of Substance’, while the sub-heading clarified the list as Australia’s 30 wealthiest ‘self-made’ women. In the text it said that, to be eligible for the list, candidates must have been involved in the creation of their personal fortune.

So it wasn’t Australia’s wealthiest women as we were led to believe on the cover, it was entrepreneurs who made it themselves; two very different things, as we all know.

But then it gets confusing.

For instance, two of the top five, Rhonda Wyllie and Patricia Ilhan, have fortunes that were generally associated with their late husbands. John Ilhan built Crazy John’s and Bill Wyllie (not John as BRW states) was a corporate turnaround expert from Hong Kong who retired to Perth before he passed away.

BRW said Mrs Ilhan was a former Telstra employee who worked closely with her husband to build Crazy John’s. It is less explicit about Ms Wyllie’s role in creating the fortune she now controls, estimated to be nearly $350 million.

It is very risky to be judgemental about the role of partners, male or female, in the development of a business generally thought to be led by a spouse.

Family courts regularly deliver the verdict that staying at home and raising children is an integral part of developing a personal fortune; thus they tend to split assets down the middle.

That might be right, but calling the recipient ‘self-made’ is a long bow.

Stretching the credibility of the BRW list even further is the inclusion, at number four, of actress Nicole Kidman with a $320 million fortune. In its brief note on her, BRW states that much of her wealth comes from her divorce from an even bigger star, Tom Cruise, to whom she was married for about 10 years. Self-made indeed.

Even the BRW number one, Vicky Teoh, and its number five, Charlotte Vidor, share their businesses with their husbands, who are typically the ones associated with the business when they are mentioned in the press (or on the company websites). Mrs Teoh does own 18 per cent of TPG Telecom in her own name, but she has never been a director of the listed entity her husband, David, chairs.

Potentially these women are selfmade but it is not made clear by BRW just what part they played in building what are very successful first-generation family businesses.

A better example is number six on the BRW list, Therese Rein. She is the acknowledged driver of a successful international business empire. If, due to some unfortunate circumstances, Ms Rein passed away tomorrow or the couple were divorced, no editor would drop her husband, former prime minister Kevin Rudd, into a list of selfmade men based on the $200 million fortune that his wife is estimated to have amassed.

I am sure that Mr Rudd has played a bona fide part in Ms Rein’s business success. An encouraging supporter, a sage adviser, a willing acceptance of the family burden - it is a rare person who is both hermit and self-made magnate. But I would struggle to put him into any list of self-made wealth if he were no longer married.

Another example, at number 12, is another WA entry Janet Holmes a Court, who has salvaged a business empire on the back of what was left from her late husband Robert’s entrepreneurial days.

My recollection of the Holmes a Court story is of her discovering a business in crisis after her husband’s sudden death. BRW credits Mrs Holmes a Court with turning the business around; fair enough - but how is that different from Mrs Rinehart?

About 20 years after her husband’s death, there is no doubt Mr Holmes a Court is a savvy corporate operator who stakes her own claim as a business leader. Would you call that self-made? It is a difficult argument to make if you are excluding Mrs Rinehart.

THE federal government’s hypocrisy over extending regional funding eligibility to western Sydney would be bad enough if it didn’t coincide with moves to restrict the use of the 457 visa system.

For years, Perth was considered outside the Regional Sponsored Migration Scheme, even though the city was desperate for workers to fill the void left by those heading to the mines. In fact, many of those enticed to Perth from overseas were likely to be fly-in, fly-out workers filling a regional job even if their home address was in the city.

The federal government capitulated on this restriction in September 2011. It was too late to help the state during the biggest stretch of the boom but obviously was belatedly welcome.

It might have been loose language to call Perth regional, but given the city’s issues were driven by demands from regional areas it was not a silly idea, especially as Adelaide had that status without many of the same people pressures.

And now, when there are still huge needs for offshore workers to develop this state, federal Labor is tightening another migration scheme, the 457 visa, to assuage its mates in the union movement.

So a real regional issue is ignored while a fake regional area is created.

Greater Western Sydney has nothing regional about it. It is part of the metropolitan area of the country’s biggest city. There is no purpose to relabel it except to pork barrel.