Hancock Prospecting is poised to become Western Australia's biggest private company after a investment and acquisition spree in iron ore and agribusiness which is expected some time this year to push its revenue past that of the incumbent number one for the past 12 years, home builder BGC. A 2018 reranking appears certain following research for the Business News Private Companies list published today in a special report. 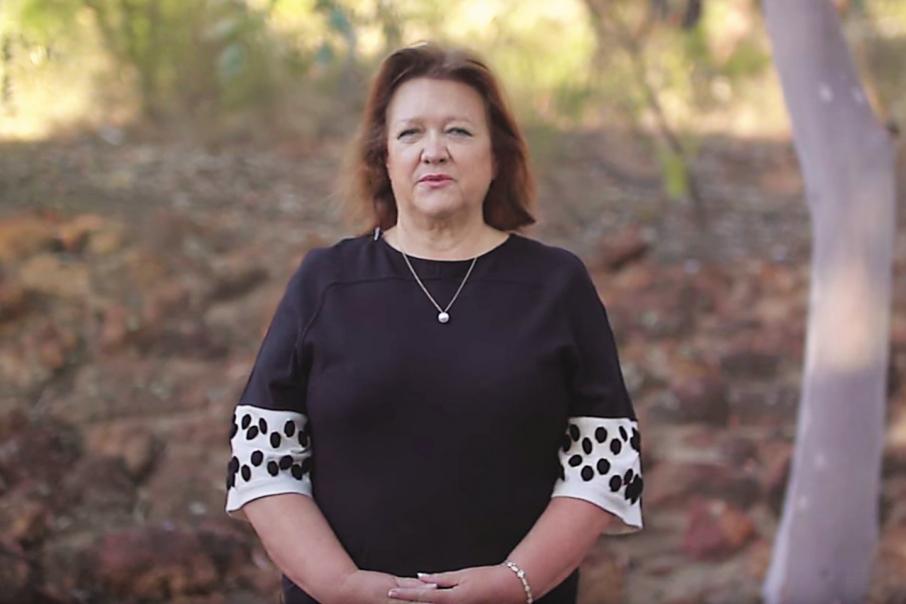 Gina Rinehart’s acquisition spree started in July 2014, when she spent a reported $40 million acquiring a half interest in Graham Laitt’s Liveringa and Nerrima stations in the Kimberley.

SPECIAL REPORT: Hancock Prospecting has invested more money and completed more acquisitions than any other private company in WA over the past three years.

One company has topped the list in more than half of the 20-plus years Business News has ranked Western Australia’s largest private companies.

Its annual revenue, which has peaked at more than $3 billion, dropped to $2.37 billion in 2014-15, according to the most recent data publicly available from the Australian Taxation Office.

The slowdown in housing construction in WA suggests BGC’s turnover is likely to slide lower in 2015-16, and especially in the current financial year.

BGC is not alone among big private companies in WA to face revenue pressure.

The owner of Hungry Jack’s, Competitive Foods Australia, Wilson Parking, mining contractor Barminco and Perth Airport were among those that defied the trend.

However, that is rapidly reversing as Hancock is flooded with increased revenue as production ramps up at its 70 per cent-owned Roy Hill iron ore mine.

Hancock reported total revenue of $1.72 billion in the year to June 2016, according to a statement released by the company. 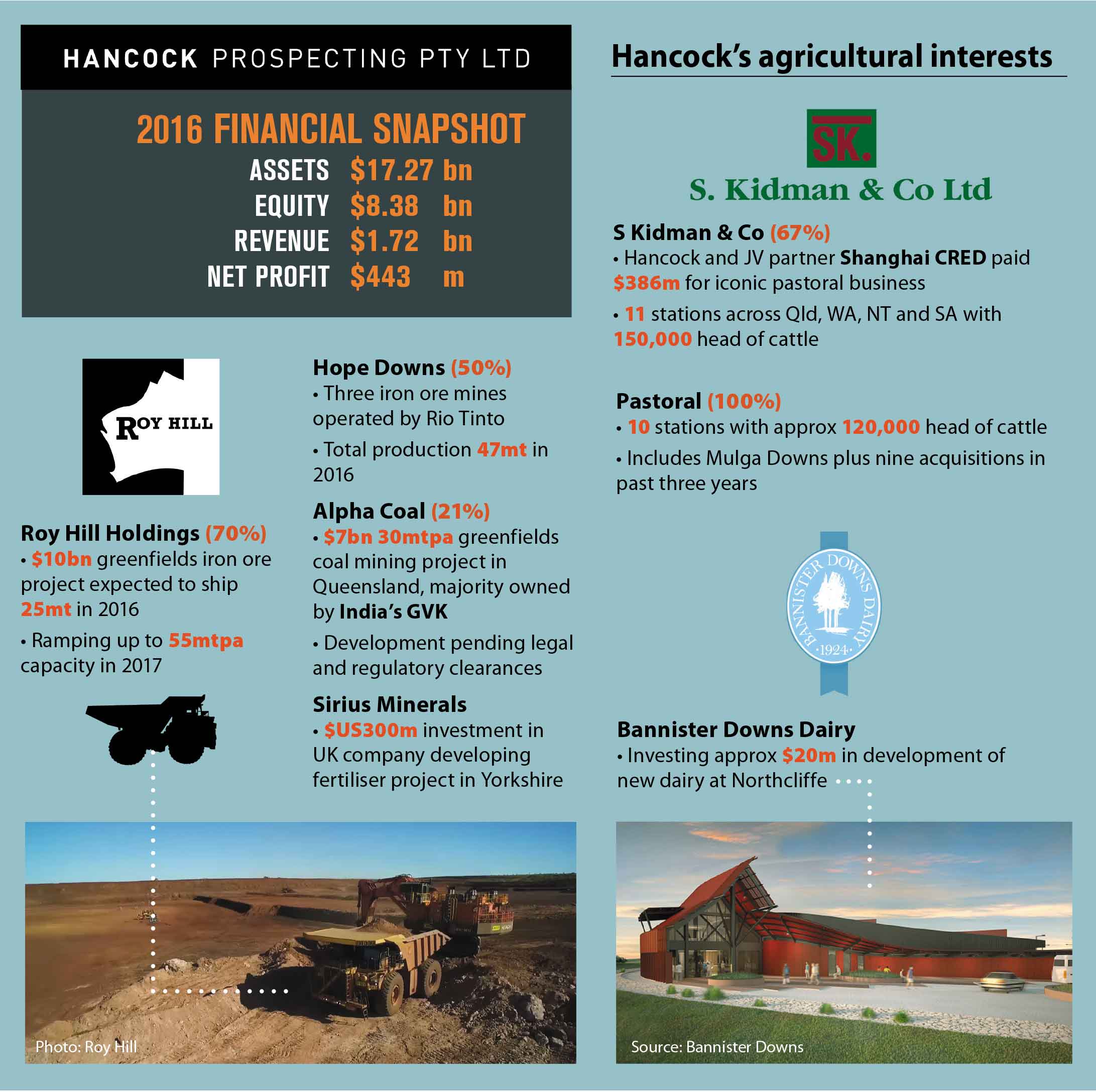 That doesn’t count any revenue from its rapidly expanding agricultural operations.

Hancock owns 10 cattle stations in its own right, with nine of those purchased over the past three years.

Put together, the group has rapidly become one of Australia’s top three beef producers, with a herd size growing to 300,000 head.

Hancock has also committed to invest $US300 million ($A395 million) in UK company Sirius Minerals, for a fertiliser project in the UK.

A much smaller but still significant investment is the estimated $20 million Hancock is pumping into the expansion of Bannister Downs Dairy’s operations in WA’s South West.

In addition, it retains a minority stake in what is planned to be a major new coalmine in Queensland (see graphic for details).

Hancock’s main source of income until this year has been the Hope Downs mines it owns in a 50:50 joint venture with Rio Tinto.

Since starting production at Hope Downs 1 in 2007, the joint venture has developed three open-pit mines at two adjacent projects, and steadily lifted output each year.

Production from the Hope Downs mines reached a new high of 47 million tonnes in 2016.

While production volumes have risen, the amount of revenue from Hope Downs has fluctuated with iron ore prices.

Hancock’s revenue peaked at $2.68 billion in 2013-14, when production at Hope Downs 4 kicked in and the group benefited from high iron ore prices.

Its revenue has waned since, because the higher production volumes at Hope Downs have been outweighed by lower iron ore prices.

In the 2016 calendar year, Hancock’s share of production (23.5mt) would have generated sales revenue of $US1.26 billion ($A1.68 billion) – that’s assuming Hope Downs ore sold for the same price as Rio Tinto’s average price of $US53.60 per tonne

If the average selling price jumped this year to, say, $US65/t and output was steady, Hancock’s share of revenue would increase to about $A2 billion.

If the spot price stayed around current levels above $US90/t, the boost to revenue would be commensurately larger.

Roy Hill Holdings iron ore mine, which shipped its first ore in December 2015, has added to Hancock’s revenue only since September 1 last year.

That’s when the project was assessed to be operating as intended by management, and consequently the capitalisation of operating costs and sales revenue ceased from that date.

The latest update on the project came from Roy Hill chief executive Barry Fitzgerald, who told a mining conference in Melbourne last November that production hit 3.2mt in the month of October.

Combined with the Hope Downs revenue, that puts Hancock’s total revenue well above $A4 billion.

Amidst the flood of revenue from Hope Downs and Roy Hill, it is easy to forget Hancock Prospecting still benefits from the royalties deal negotiated by Mrs Rinehart’s father, Lang Hancock, and his business partner Peter Wright in 1962.

As a result of that deal, Rio Tinto subsidiary Hamersley Iron has paid royalties to the HanWright Partnership every year since.

Hancock Prospecting and Wright Prospecting have also engaged in multiple legal disputes over their royalty entitlements and respective ownership of mining tenements.

These disputes continue to the present day, with the Hope Downs tenements the current source of contention.

Hancock’s agricultural investments build upon the foundation of Mulga Downs station in the Pilbara, which has been in the family for many years.

Mrs Rinehart’s acquisition spree started in July 2014, when she spent a reported $40 million acquiring a half interest in Graham Laitt’s Liveringa and Nerrima stations in the Kimberley.

She moved to full ownership the next year, when she also spent an estimated $30 million buying the nearby Fossil Downs station.

Hancock’s subsequent acquisitions have been in the Northern Territory, Queensland and NSW, where Hancock has also acquired 8,000 head of prime purebred Wagyu.

The 2GR beef will include Wagyu beef from three Hancock cattle stations in western NSW, near Dubbo.

The Wagyu herd is grain fed in Queensland prior to processing at Warwick.

The Queensland properties were originally acquired as part of a $500 million plan to purchase dairy farms and manufacture powdered milk for export to China.

Changing market conditions prompted the group to switch its focus to Wagyu.

Hancock’s growth plans in agriculture include a commitment to invest up to $19 million in the Kidman business.

The Hope Dairies venture in Queensland was one of several that have not panned out over the years.

In 2007, Hancock formed the Jacaranda Alliance joint venture with former Rio Tinto executives to explore for uranium and other minerals.

In 2008, it announced an agreement with listed company Mineral Resources to develop a manganese project in the Pilbara.

The positives have far outweighed the negatives, and given Mrs Rinehart the capacity to be a major philanthropist, with beneficiaries including the National Breast Cancer Foundation, Parkerville Children and Youth Care and Sydney’s St Vincent’s Private Hospital.

Hancock Prospecting has bolstered its management team to support its expanded operations.

The group is currently recruiting a CEO agriculture, with the successful recruit to report to Hancock’s chief executive Gary Korte.