Riding out the financial storm

PERTH'S not-for-profit sector appears to be less exposed to the financial crisis than similar groups in the eastern states, which are bracing for a cutback in donation pledges and sponsorship deals from business. 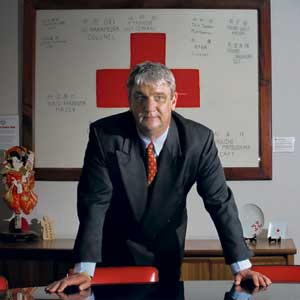 PERTH'S not-for-profit sector appears to be less exposed to the financial crisis than similar groups in the eastern states, which are bracing for a cutback in donation pledges and sponsorship deals from business.

"Business will start to look at where and how they spend their money," he said. "The situation for charities providing community services is doubly concerning, as falling income is compounded by rises on costs coinciding with an increase in demand for their services."

All of the local charities spoken to by WA Business News were confident that existing donations and sponsorship deals would be honoured, although some indicated a marked slowdown in businesses making new commitments.

"There's certainly no indication of anyone not keeping to a promise of sponsorship or donations," Australian Red Cross WA corporate relations manager David Downing said. "We haven't come across this yet, but what I have noticed is the number of businesses currently undergoing reviews, indicating to us that they're not ready to make a commitment. There's probably more than normal."

In a further sign of Perth's comparatively stable economic position, the latest Red Cross street appeal in WA raised $35,000, almost twice as much as last year's record of $20,000.

Asthma Foundation of WA chief executive John Gummer said his West Perth-based organisation had not identified a decline in community and corporate support as a consequence of the credit crunch.

"We are yet to observe changes in the giving patterns of individuals and organisations," Mr Gummer said.

"There's no indication of a slowdown yet and we still have strong relationships with a number of our corporate partners," he said.

United Way WA, which introduces programs to help raise funds for 190 charities, said although there were no reported cases of businesses not honouring donations or sponsorship deals, it was still early days to determine if WA could weather the economic storm.

In Perth, recruitment firm Interpeople says despite the meltdown, it will stand by its commitment to donate 10 per cent of yearly profits to various charitable causes, which will be culminate in the inaugural Interpeople Charity Ball in February.

However, not everyone is immune to the global financial woes, particularly the sports sector, which relies heavily on sponsorship to run events.

Doubts linger over the Australian National Beach Volleyball tour due to be held in Scarborough in March 2009, with major US sponsors Crocs and the Association of Volleyball Professionals questioning their five-year commitment to the six-event national tour.

As reported on the Volleyball Australia website, the calendar for 2008-09 still has not been confirmed.

"The release of tour dates has been delayed due to ongoing contract negotiations with the AVP," the website says.