Acrimony and finger pointing continue at a political level as the state government faces a ‘horrible’ mid-year budget review, with latest figures suggesting the recent dramatic increase in state debt has been fuelled by a spending push that has outpaced revenue growth.

Acrimony and finger pointing continue at a political level as the state government faces a ‘horrible’ mid-year budget review, with latest figures suggesting the recent dramatic increase in state debt has been fuelled by a spending push that has outpaced revenue growth.

Business News has analysed the major fiscal trends of the past seven years to find the key causes of the still-deteriorating budget position. The review is due to announced this week.

It comes as recent analysis from the Commonwealth Bank suggests the impact of a blowout on the state’s credit rating will depend on the level of slippage of spending.

Ultimately, spending and revenue growth have been closely matched over the course of the boom, while the government has relied on borrowings to fund its capital investment program. 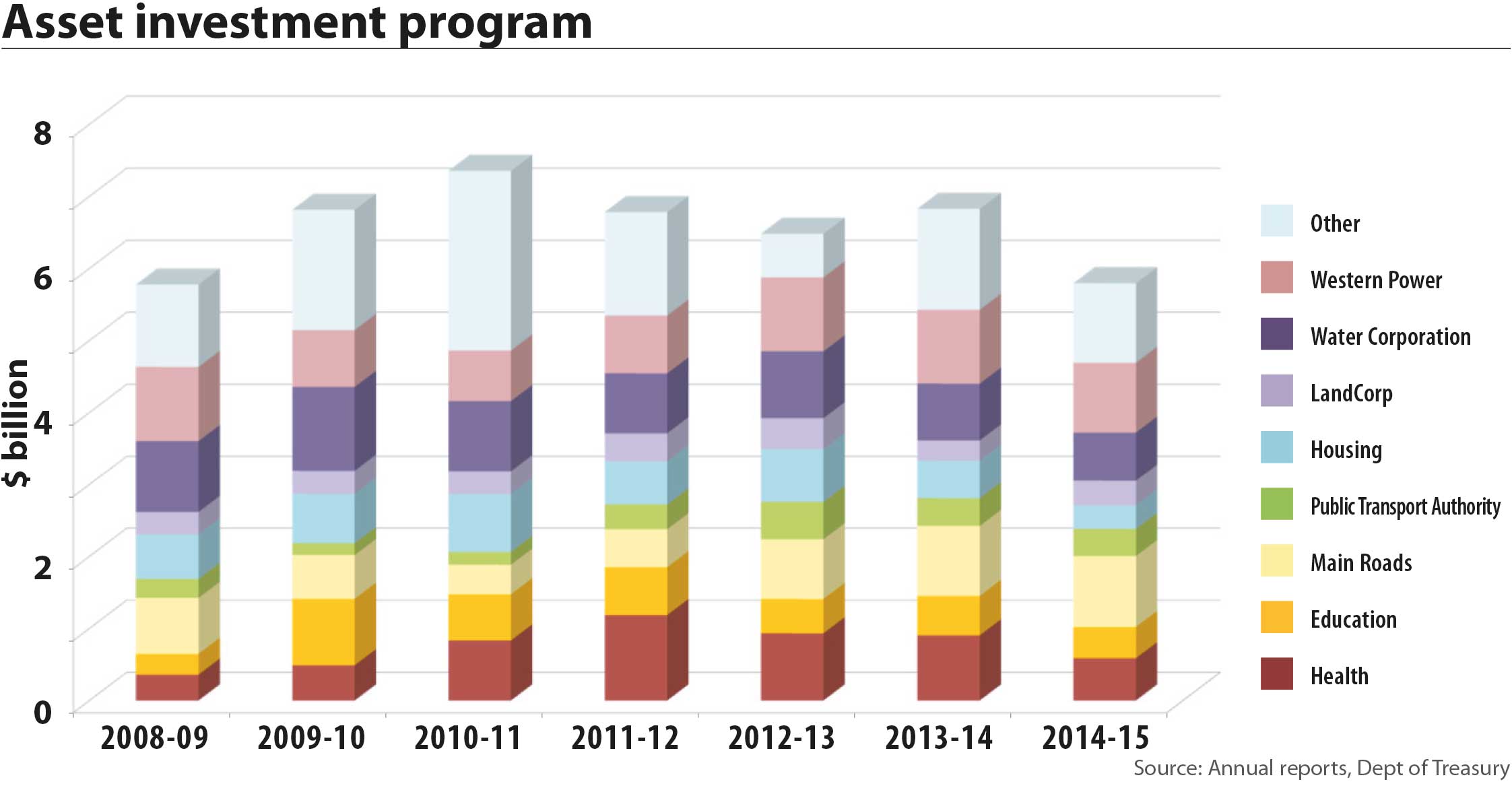 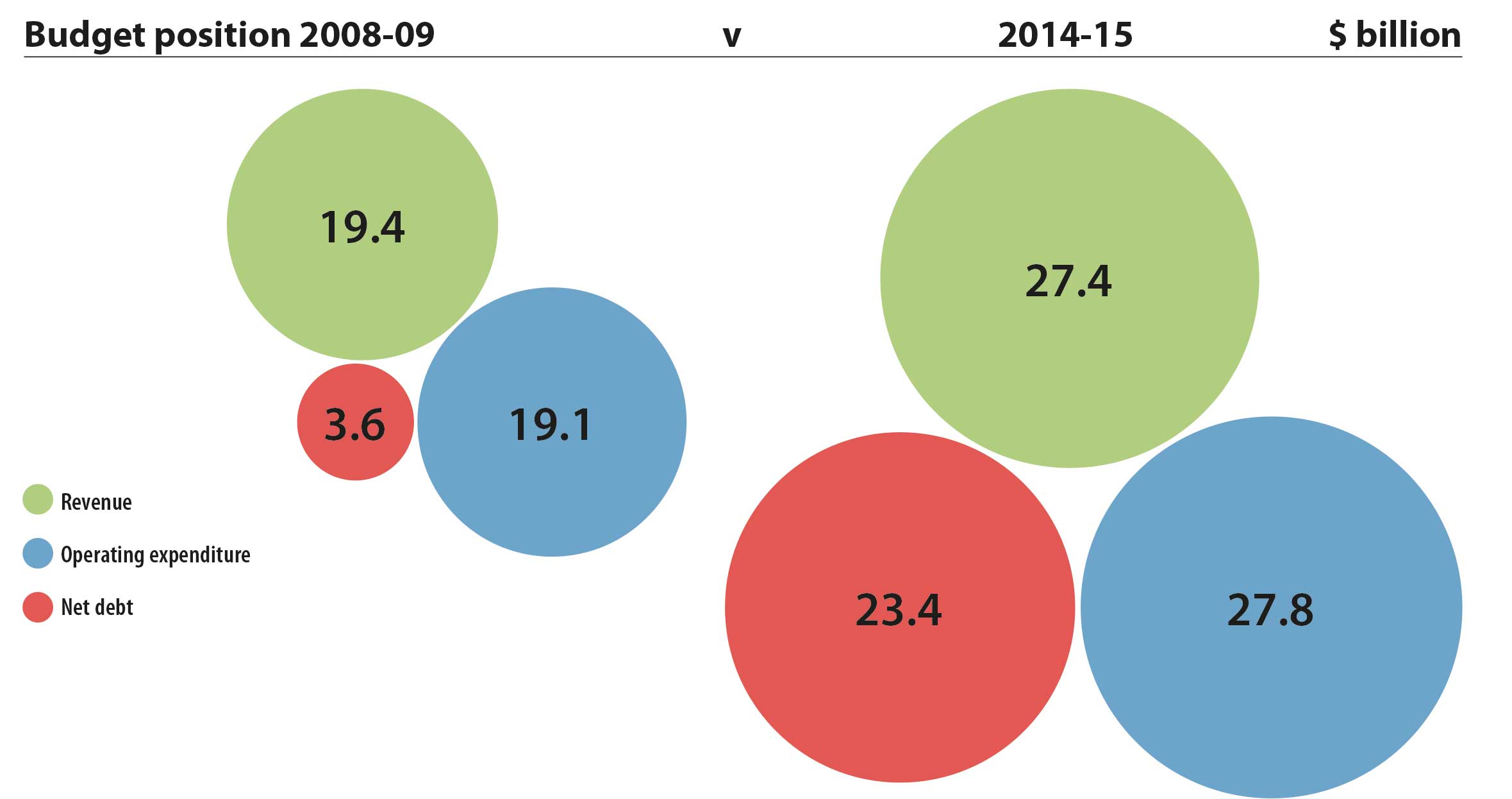 The state government’s intake grew at roughly the same rate as Gross State Product in the seven-year period to June 2015, with both at around 41 per cent.

It hides an interesting dynamic.

The revenue mix has changed dramatically in this time, with mining royalties rising from $2.35 billion in the 2009 financial year to a peak of $6 billion in the 12 months to June 2014.

These fell to $4.6 billion in the most recent financial year, making it about one sixth of Treasury’s income; further falls are expected this year. Simultaneously, GST grants have fallen from $3.5 billion to $2.2 billion, with a drop anticipated as the impact of lower iron ore prices slowly works through the Commonwealth grants system.

With a record low GST relativity, those distributions now make up less than 10 per cent of revenue.

Roughly speaking, every new dollar of mining royalty revenue was matched by a 50-cent fall in GST grants.

Other revenue sources broadly moved in line with economic growth, although state taxes (payroll, land, stamp duty) were lower as a portion of the economy than in other jurisdictions.

In the most recent budgets there were big revenue write-downs, including of $10 billion across the forward estimates from 2015-16.

Fundamentally, the state government, like most market participants, didn’t foresee the speed at which the mining industry’s slowdown would take place, and had earmarked most of the gains for spending.

According to Commonwealth Bank senior fixed income strategist Philip Brown, the real danger to the state budget as the mid-year review approaches is not iron ore prices, but rather the slowdown in the economy overall.

So far this financial year, he said, iron ore had averaged a price of $52 per metric tonne, above the state government’s target price of $47.50.

If the price remained at the current level of $39 for the rest of the year, it would mean performance was only slightly below target, reducing revenue around $175 million.

Operating deficits are only a minor part of the debt story.

Operating expenditure, which does not include capital investment programs, lifted around 45.5 per cent over seven years.

That was enough to take what was a small GFC-era surplus into the red.

Former under-treasurer John Langoulant argued at a recent Bankwest Curtin Economics Centre event that this was the main cause of the state’s financial problems.

He said despite the talk about bigger-picture spending items, recurrent spending, including salaries, had been the root cause.

From $7.7 billion in the final budget of the Alan Carpenter-led Labor government, salaries grew more than 44 per cent to $11.1 billion in the 2015 financial year, according to annual reports on the state’s finances from the Department of Treasury.

That didn’t include superannuation or other costs, although some notable public sector pay rises had an impact.

One was a 6 per cent pay rise for teachers within a month of Colin Barnett’s government taking office (following a pre-election pledge), while another was 14 per cent over three years deal with nurses during the 2013 state election.

Efforts were made to rein-in the increases, too.

They started with the $8 billion fiscal action plan in December 2013, which promised to hold public sector salary rises to inflation and undertake 1,000 redundancies.

A further cost was through the Royalties for Regions program, which emerged from Mr Barnett’s deal with (then) Nationals WA leader Brendon Grylls to secure power.

The scheme spends about $1 billion annually through various portfolios to upgrade infrastructure in the bush.

According to the Department of Regional Development, at least $5.6 billion has been spent since 2008.

Subsidies for water, electricity and public transport usage weigh on the state’s budget too, with the latter worth about $740 million in the 12 months to June this year.

With revenue and operating expenses growing at a similar rate, the state’s operating budget remained in surplus for six straight years.

Unlike the federal budget, infrastructure investment is not included in the headline state budget figure.

This can be paid for from a number of sources. One is through operating surpluses.

From the 2009 financial year to June 2014, surpluses provided almost $4.4 billion for capital spending.

A second is through asset sales, which are now being embraced in the expectation they could raise up to $5 billion.

Other methods include drawing down retained earnings in government corporations or having those entities fund investment from revenue.

In the case of the state government, it relied heavily on borrowing, which dramatically lifted net debt.

As a portion of state revenue, net debt lifted from 25 per cent in 2005 to 67.9 per cent in June, according to a recent study by Bankwest Curtin Economics Centre.

It was spread across a variety of programs (see chart).

The largest spenders were Western Power and the Water Corporation, with around $6 billion each for the period, as the state government sought to upgrade old electricity network infrastructure.

In terms of government departments, health was the largest spender, with around $5 billion paying for the construction of more than half a dozen new hospitals, including Fiona Stanley, Midland and the new Perth Children’s Hospital.