Retravision's largest franchise owner David Dorsett-Lynn is so confident of the electrical retailer's enduring brand strength in Western Australia - he is planning to back that faith with two new stores in the Perth metropolitan area. 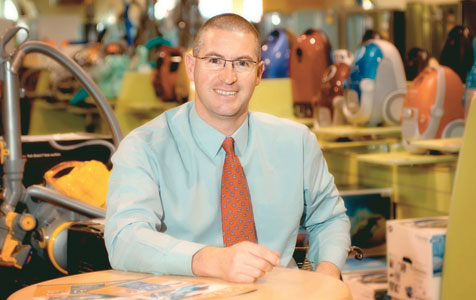 WEST SWITCH: David Dorsett-Lynn says the Retravision brand is doing well in WA, despite it being damaged in the eastern states. Photo: Lloyd Smith Photography

Retravision's largest franchise owner, David Dorsett-Lynn, is so confident of the electrical retailer's enduring brand strength in Western Australia he is planning to back that faith with two new stores in the Perth metropolitan area.

Last year, Retravision was wiped out on the east coast and halved its stores in WA because of the collapse of its Retravision buying group, leading its then-chief executive officer, Paul Holt, to admit there had been "significant damage" to the brand.

Late last year the National Associated Retail Traders of Australia (Narta) took over as the buying group for Retravision.

Mr Dorsett-Lynn said Narta decided companies that with less than $5 million in annual turnover and smaller floor spaces be rebranded as Betta stores, one of the other companies it supplies. Larger stores with higher revenue could remain as Retravisions.

There were 180 Retravisions nationwide last year. Apart from stores in WA, there are now only two Retravision stores in South Australia and one in Queensland.

Narta, which is the largest independent electrical buying group in Australia and New Zealand, buys stock in WA for the 22 Retravision and 17 Betta stores.

Mr Dorsett-Lynn said being a part of Narta had enabled his group to extract better value.

"Instead of being part of a buying group that did a little under a billion dollars, we're now part of a (much bigger) buying group, so we've certainly seen additional margin opportunities," he said.

"We've seen positive growth within our brand in the last six months as well. We're travelling really quite nicely."

"We could essentially double our business in Western Australia if we wanted to without needing to go to the east coast. I'd say I've got five to seven years growth opportunity in front of us before I'd even need to start to consider (expanding east)," he said.

Mr Dorsett-Lynn has also quietly launched the website, Retravision.com.au, which he took over the management of in April and will start to advertise soon.

"We've wanted the slow transactional volumes to test out processes, procedures, IT integration. We've actually surprised ourselves with the number of sales that have come through there without any advertising at all," he said.

"I'm an omni-channel believer and I've already learned from this website that a lot of people do research on the website then look up a store."