Vacant shops are usually considered to be harbingers of doom and gloom in the retail sector, but that may not necessarily be the case in Perth’s CBD. 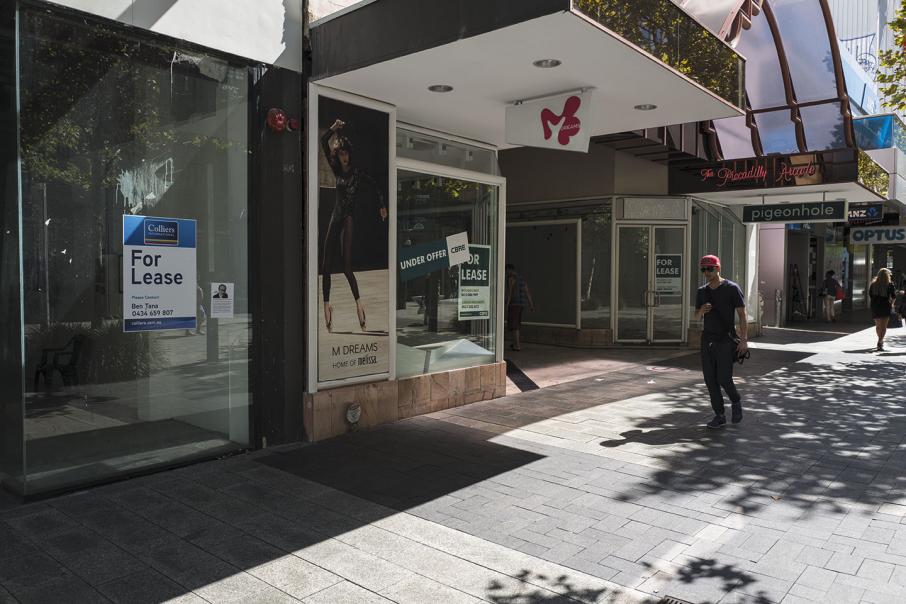 More vacant shops at Piccadilly Arcade could be an indication that a planned redevelopment program will kick off soon. Photo: Attila Csaszar

Vacant shops are usually considered to be harbingers of doom and gloom in the retail sector, but that may not necessarily be the case in Perth’s CBD.

Pending redevelopments of CBD malls – collectively worth just under $350 million – are contributing to a rising retail vacancy rate in the centre of Perth.

While the fanfare surrounding the long-awaited opening of international retailer H&M at the historic GPO Building in Forrest Place has brought hype back to the city, preliminary data from commercial real estate agency Savills indicates retail vacancies are rising.

Ms Dean said while the retail vacancy rate hit a cyclical low in 2011 at 8.5 per cent, and had been rising since then, it had stabilised over the past 12 to 18 months.

However, Ms Dean said the recent increase in vacancies, which she described as marginal, was not necessarily a sign that landlords were struggling to find tenants.

“The redevelopments that are occurring point to long-term confidence in the retail sector,” Ms Dean told Business News.

“There is a fair bit of money being tossed around to enable that to happen in the medium term, so landlords are looking at their tenancy mix in particular, and not necessarily their vacancy.”

The first major redevelopment likely to kick off in the CBD is at Forrest Chase, where owner ISPT has proposed a $100 million revamp.

ISPT put out construction tenders for the development late last year, with the five-level complex proposed to incorporate an expanded Myer store, as well as 39 specialty stores.

ISPT has also been busy buying up assets surrounding its Enex100 shopping centre, which has been hit by increasing vacancy in recent months.

High-end retailers David Lawrence, Herringbone and Witchery have all shut their Enex100 doors in recent months, leaving one of the city’s most modern malls with an increased amount of empty space.

However, last year, ISPT purchased the neighbouring Sheffield House from APiL for $31.5 million, the building that houses Dymocks for $17.5 million, and the building where Sportsgirl is located for $12 million.

Ms Dean said those acquisitions, which were brokered off-market by Colliers International’s Ben Tana, were an indication that ISPT had confidence in Perth for the long term.

Elsewhere in the city, Charter Hall is planning a $240 million redevelopment of Raine Square, which will incorporate a 12-screen cinema complex, operated by Palace Cinemas, an enhanced retail offering and a new restaurant and bar precinct.

One of the city’s most historic arcades is also in line for change, with Mellen Events preparing to reactivate the 89-year-old Piccadilly Theatre, part of a refurbishment plan worth between $3 million and $3.5 million.

A previous approval for a $12 million upgrade at the art deco arcade lapsed in October last year.

Plans are also in motion for a $6 million redevelopment of the Plaza Arcade, which will be anchored by Japanese fashion retailer Uniqlo.

Burgess Rawson director Cameron Hopkins said vacancies at some of those arcades were not necessarily indications that space was available for lease, particularly on a long-term basis.

“Landlords often need to create or maintain vacancies to aid redevelopment, and constant upgrading of retail space is an essential ingredient of success in an industry that changes as rapidly as retail does,” Mr Hopkins told Business News.

“Retailers are already positioning themselves for the opportunities that will exist within the sites being redeveloped and upgraded, but also within the city as a whole.

“When the city can offer unique retailers of a size and scale that can’t be matched at the suburban shopping centres, and the quality of the city shopping experience and entertainment is enhanced to compete against the biggest and best on show at the regional shopping centres, it will attract other retailers wanting to get a piece of the action.”

“On the surface when you look at it, you think ‘oh no, no-one wants to lease shops in the CBD’, but it’s not really the case,” Mr Morabito said.

“It’s more the landlord saying ‘I’m about to spend some money, so I’m not going to do any deals here’.”