The pandemic has accelerated existing issues and trends facing the retail property sector. 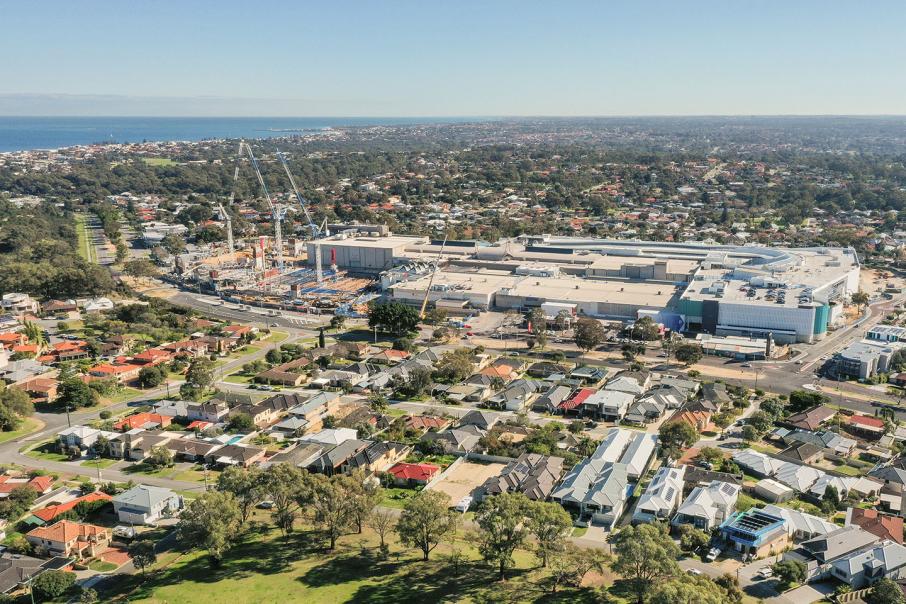 The state’s retail sector is showing signs of life after lockdown, with spending up and anecdotal reports that foot traffic at shopping centres is nearing pre-COVID-19 levels.

Retail expenditure growth in Western Australia of 4.9 per cent for the 12 months to June 2020 was second only to Queensland.

Urbis director, property economics and market research David Cresp said the state had resumed a sense of normality, potentially bolstered by the 500 or so people returning to WA each week.

“Someone described the WA lockdown as a product recall for people, which I thought was a very apt way of describing it,” Mr Cresp told Business News.

“WA has highlighted [that] once people are out of lockdown, they are going shopping and using a centre as a day out.

“Retail is not going away. There will be some shifts and acceleration of trends that have been happening for a long time, [such as] online sales … the push to mixed use.

“But it’s still a core fundamental sector of the property market and there’s a huge amount of institutional funds in retail.”

Some of those funds are starting to feel the flow-on-effects of enforced shutdown measures, however, with the country’s major shopping centre owners, Vicinity Centres and Scentre Group, the operator of Westfield, both posting huge financial losses.

Vicinity Centres reported a net loss of $1.8 billion for the 12 months to June 30, as well as $264 million worth of write-downs across its 12 WA assets.

Similarly, Scentre Group reported a half-year loss of $3.6 billion, following a $4.1 billion write-down of its properties across Australia.

Although the group does not provide a centre-by-centre breakdown, its WA centres reported one of the lowest rates of specialty in-store sales losses over the past six months.

Colliers International head of WA leasing Ahmad Ibrahimi said while economic uncertainty and volatility remained, the state had been a leader in managing COVID-19.

Being able to reopen earlier than most states had helped the sector reset faster, backed by centre upgrades over the past five years that had diversified tenant bases from straight retail to hospitality and entertainment, he said.

“Significant investment by proactive landlords in WA has helped them obtain a strong position within the retail sector,” Mr Ibrahimi told Business News.

“This strong rebound demonstrates the accomplishments of the retail sector in cementing its role in the WA economy.” 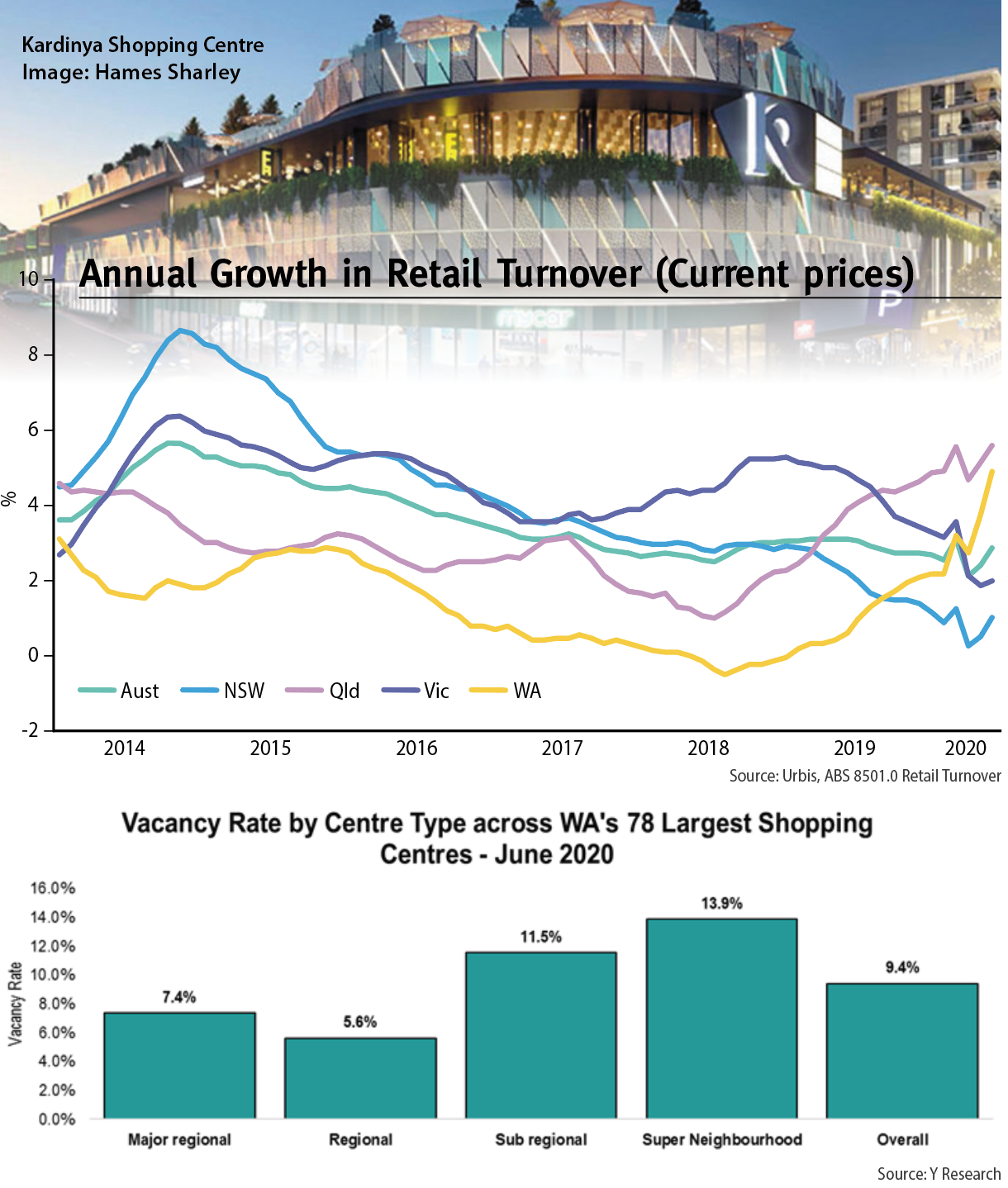 COVID-19 has, so far, had minimal impact on WA’s shopping centre vacancies, according to Y Research director Damian Stone.

Mr Stone said that was due to a range of existing factors including: weak economic conditions after the mining boom; a series of national retailers going into administration; and recent shopping centre expansions adding supply.

While a limited number of retailers had surrendered their tenancies in recent months – largely tourism-based retailers such as travel agents – Mr Stone said the pandemic’s longer-term influence was yet to materialise.

“For a majority of retailers, a combination of rental relief from shopping centre owners, a national code of conduct restricting evictions, and government assistance (JobKeeper) has seen them return to trading,” he said.

“It looks normal from the outside, but [after] a closer look you’ll see a lot of these retailers are struggling.

“The interesting discussion is the number of sales and ‘back in five minutes’ signs, because they’ve cut staff.”

Mr Stone said he had personally inspected 78 of the state’s largest supermarket-based centres across the broader Perth metropolitan region, and recorded a 9.4 per cent collective vacancy rate as at June 2020.

The Y Research report found the vacancy rate for WA’s major regional centres, including Lakeside Joondalup, Westfield Booragoon and Galleria, was 7.4 per cent, which was more than three times higher than their historical average of 1 to 2 per cent.

Claremont Quarter recorded the lowest vacancy rate of any centre at 1.7 per cent.

Mr Stone said there was a wide disparity across centres, likely reflecting the economic conditions across Perth’s suburbs; 21 suburban centres had vacancy rates of more than 15 per cent and five centres were more than 25 per cent empty.

That number could increase further, he said, with the moratorium on evictions set to finish in October.

“Based on discussions with industry stakeholders, the expectation is that, across the balance of 2020, we will see a limited number of retailers close,” Mr Stone said.

“But the new looming cliff is February-March 2021, when government assistance ends and investment decisions, such as ordering winter stock, are required.”

The internet had been an emerging challenge, he said, and COVID-19 had exacerbated the threat from online sales.

The consolidation of a number of national chains, which typically took out the largest tenancies in centres, was another emerging trend Mr Stone said shopping centre owners would have to navigate in the coming months.

In May, Target announced the closure of 75 outlets and the conversion of 92 into Kmart stores.

This followed the closure of hundreds of other stores associated with the collapse of national chains including Australian Geographic, jeweller Michael Hill, and accessory store Colette.

Mosaic Brands – the operator of clothing chains Noni B, Rivers, Millers and Katie – is retail’s latest casualty, announcing the potential closure of 300-500 stores over the coming 12-24 months.

Mr Stone said more consolidation could follow, with COVID-19 prompting national retailers to assess their most profitable stores and locations with the most foot traffic.

Re-imagined entertainment precincts have been the jewel in the crown for shopping centre expansions such as Westfield Carousel and Westfield Whitford City in recent years, but health and wellness is quickly becoming the next focus.

According to an Urbis study, patrons who visited a medical centre were found to spend a higher amount on apparel than those who didn’t.

Whatever the cause of that behaviour, Mr Cresp said centre owners were keen to harness opportunities in the health and wellness space, a market that had also been growing in terms of household expenditure and had demonstrated resilience during the pandemic.

“If anything, this (COVID) has accelerated that trend to mixed use,” he said.

“At the end of the day, that [the experience] is the difference between going to a shopping centre or buying something online.

“Some of those centres, there’s a recognition it’s gotten as large as the catchment area … now it’s a matter of making the land work harder.”

Medical was part of that mix, Mr Cresp said, as well as accommodation, whether that was short-stay, apartments or retirement living. As an example, he pointed to Blackburne, which planned 94 apartments as part of the $800 million Karrinyup Shopping Centre redevelopment.

Works on that expansion are under way, and will almost double Karrinyup’s footprint to 109,000 square metres, overtaking Lakeside Joondalup as the state’s second largest centre, according to Data & Insights.

Construction was set to start on the planned $830 million redevelopment of Westfield Innaloo (to be renamed Westfield Stirling) last year, however, those plans were put on hold after Scentre Group announced it had purchased a 50 per cent stake in Booragoon shopping centre, joining AMP Capital as joint owner.

Meanwhile, several other suburban centres are in line for facelifts.

Property investment and development group Australian Development Capital has plans to revamp its Mosman Heights Shopping Centre, built in the 1970s, with more details to be announced in the coming weeks.

“Places that draw in the surrounding community and where they can grab a morning coffee, take a fitness class or meet friends for a meal after work. For that reason, we are actively curating retail, hospitality, wellness and fitness operators for our developments, before we start selling apartments or finalising designs.

“We then create customised spaces for these operators that work, rather than trying to retrospectively jam tenants into pre-designed spaces.”

Built has been appointed to carry out the works, and project spokesperson Clint Ford said the redevelopment included plans for an entertainment precinct, and health and wellness offerings.

“Kardinya is looking to be a leader in the town centre model,” Mr Ford said.

“It is clear that an offer of mixed amenity … will ensure sustainability of retail centres.” 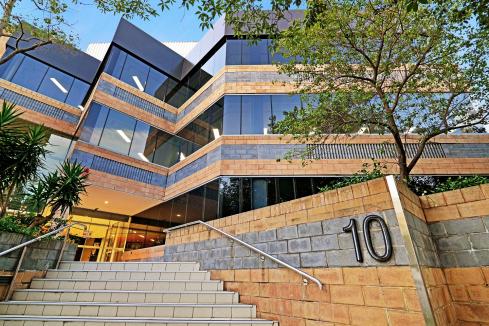