RETAILERS have taken the whip hand in negotiations for tenancies, with rental growth expected to stabilise and even drop in some precincts. 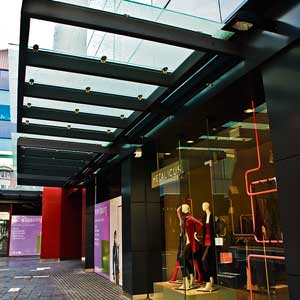 NEW BUSINESS: The first stage of retailers in the Wesley Quarter development have opened their doors. Photo: Grant Currall

RETAILERS have taken the whip hand in negotiations for tenancies, with rental growth expected to stabilise and even drop in some precincts.

According to the CB Richard Ellis December quarter retail market report, softening trading conditions will limit any growth in retail rents this year as business confidence reaches an all-time low.

But WA's retail sector should be relatively well placed to weather the storm of the global economic downturn, with high occupancy rates remaining in most retail centres and precincts, and continued demand from national retailers.

Prime locations in the Perth CBD and suburban shopping strips are the best placed, while shopping centres in secondary locations could experience a drop in rents and increased vacancies.

About 35,000sqm of new retail space will be delivered to the Perth CBD over the next two to three years including major developments enex100, Wesley Quarter, One40 William and Raine Square.

CBRE associate director of retail services Fred Clohessy said while the level of enquiry for tenancies was still strong, retailers were more cautious than they were 12 months ago.

"Because of what's happened with the economy globally and nationally, there is a degree of caution there. But we're still doing deals," he said.

Mr Clohessy said while rents had held up so far, some retailers were looking for incentives such as fully or partially funded fit-outs.

"What we're seeing is the national retailers are still prepared to pay rents but are looking for incentives. For an A-grade [location] 12 months ago, you were getting rent and little to no incentives," he said.

Positive rental growth was evidenced across all retail sectors during 2008 after strong growth during 2006 and 2007, according to the report.

CBD super prime locations were in high demand, with indicative gross face rent of $4,500 a square metre at December 2008.

Among the prime suburban shopping strips, including Bay View Terrace in Claremont, Rokeby Road in Subiaco, and South Terrace in Fremantle, rents ranged between $900/sqm and $2,100/sqm.

The next phase of retailers, including Woolworth, JB HiFi and other fashion and upmarket eateries, will open in stages, with St Georges Terrace level to open on June 2 and the Hay Street and podium levels on August 20.

The first stage of retailers in the Wesley Quarter development, including Review, Alannah Hill, Wittner Shoes and Metalicus, have also opened their doors, while luxury labels Burberry, Giorgio Armani and Karen Millen are expected to open shortly.

Mr Clohessy said while space in the major CBD developments was in very high demand in early to mid-2008, there was now some possibility of an oversupply once these developments were completed.

"Prior to Christmas I would have thought all new development and current existing developments would be filled. A couple of developments might take a little longer to fill," he said.

Lease Equity managing director Jim Tsagalis said prime locations were still in demand and would hold their value, with the firm recently completing deals in the Hay Street Mall for $5,300/sqm and in the Murray Street Mall for $4,000/sqm.

"We've had as much [rental] growth per year in the five years that we've had in the past 15 years, so it has to be at least stabilised and in some instances even come off a little bit," he said.

Retail trade figures from the Australian Bureau of Statistics showed WA retail turnover rose 3.7 per cent in February to reach $2 billion, but was down 2.7 per cent on the same month last year.

Supermarket and grocery, liquor, food and pharmaceutical, cosmetic and toiletry retailing all recorded an increase in turnover compared to the same time last year, while department stores, clothing, domestic appliance and household good retailing all fell.