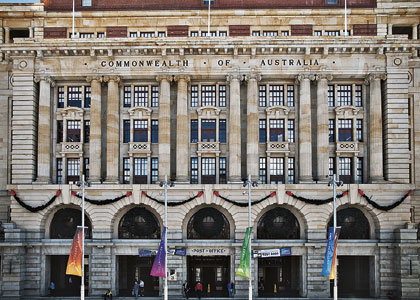 RETURN TO SENDER: Australia Post has failed to sell its General Post Office Building and will attempt to again lease out the vacant retail space. Photo: Grant Currall

Australia Post has failed to sell its General Post Office Building in Forrest Place and has, instead, reverted to trying to find tenants to fill the vacant retail space.

The government enterprise put the building up for sale in October but decided to withdraw it from the market last week because offers from potential buyers did not meet pricing expectations.

Jones Lang LaSalle agent John Williams told WA Business News there had been significant interest in the property but Australia Post had decided it would return to trying to lease out the retail space on the ground floor – despite previous attempts to secure tenants failing.

The only other tenant, technical and professional services consultancy AECOM, occupies the office space in the building’s upper levels.

The lack of interest in the building comes despite $31 million being spent on refurbishment of the façade, entire office and retail space and building a pedestrian link to 140 William Street.

The 140 William Street property has also failed to take off as a retail space as the closure of greengrocer and gourmet provedore, The Herdsman, indicates.

It was forced to shut its doors in November because of slow sales.

The sale of another central Perth retail property, 166-170 Murray Street, which includes Fitness First and Woolworths as tenants, indicates owners of such central city retail properties are struggling to benefit from their assets.

Centro Property Group bought the Murray Street complex for $71 million in 2006 but has just relinquished ownership to the Industry Superannuation Property Trust Core Fund for $57 million.

But the lagging retail market appears at odds with demand for office space and hotels in the central city.

Perth’s Citigate Hotel, on Wellington Street, has been bought for $60 million by a joint venture between GIC Real Estate and Host Hotels and Real Estate.

The deal, managed by Jones Lang LaSalle, follows a number of separate attempts to sell the building since 2010.

The Novotel Langley Hotel has been the latest to go on the market; owners Tahl Langley initially attempted to sell the hotel in 2009 after buying it for $35 million.

The hotel was put up for sale in early February and Jones Lang LaSalle expected significant interest from investors globally.

Vice president investment sales Aaron Desange said the hotel had historically traded above the market and benefited from a central city location.

Applications for new office buildings in central Perth have also been flooding in as data released last month by CBRE predicted office rents to soar as prime vacancies hit just 1 per cent.

In line with the anticipated demand, four separate applications to build office blocks to a total value of $15 million have been lodged so far this year.

They include Design Management Group’s proposal for an eight-storey office block costing $10 million in Hay Street. The company bought the 1006-1008 Hay Street property on the corner of Elder Street in 2010 for $4 million.

It has adapted initial plans put forward in March last year for a 10-level office building to now proposing only eight storeys, but with a two-storey car park.

Two separate applications have also been lodged for properties in Prowse Street, just off Wellington Street, both at a cost of $2 million each for the development of four and five-storey office blocks.

The hot office space market has also seen a deal finalised for the Stockland Trust’s half-share in the Exchange Plaza, sold to the AMP Capital Wholesale Fund for $157 million.

However, Primewest has failed to sell its 16 Parliament Place office building, which it bought for $14.5 million in 2010.

Chief executive Julian Lodge said the sale of the property to a private investor fell through when the buyer failed to fulfil contract terms.

Primewest subsequently decided to take the property off the market and had no immediate plans to sell.