Government policy is forcing a shift in thinking for shopping centre developers. 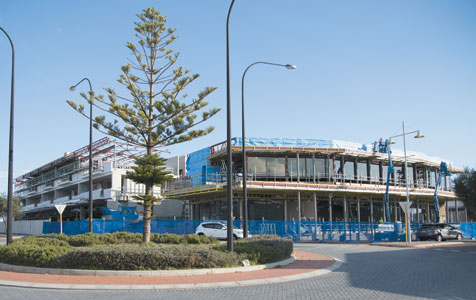 OPENING UP: The second stage of construction at Ocean Keys Shopping Centre will include an ‘active edge’ of fast food and other food operations. Photo: Attila Csaszar

Government policy is forcing a shift in thinking for shopping centre developers.

Business News reported last month that the state government’s Activity Centres planning policy had provided the impetus for more than $700 million worth of new centres or expansion projects currently under construction in the metropolitan area, while more than $1.5 billion in expansions were being planned.

The policy has also encouraged a shift away from retail as the primary activity for suburban shopping centres, according to Hames Sharley director of urban development Michelle Cramer.

“The policy is really becoming an enabler to securing those retail assets as destinations rather than just places of consumption, which is a big shift,” Ms Cramer told Business News.

“It started off with entertainment being added to the mix, then cafes and restaurant precincts, and it is slowly evolving to become truly mixed use, which the Activity Centres policy is enabling.

“What we won’t see in the future is a shopping centre with a sea of car parking around it.”

“Up until this point in time we were buying and transacting to get a product, and now we are willing to go to these places to have a transaction with the place itself as a destination, because that’s what our lifestyle is seeking.”

However, Ms Cramer said the policy added to the complexity of the planning process, in particular determining how different uses fitted together.

She said specific types of activity centres were generated through different uses, pointing to Murdoch as a good example of a centre based around a knowledge economy through the long-established Murdoch University and the soon-to-open Fiona Stanley Hospital.

“We just have to get better at dealing with that complexity because I don’t think anyone is prepared to go back to the easy way of zoning.

“That’s not the right outcome for real cities and real lifestyles.

“The days of the cookie cutter are over and it’s more about how you get truly vibrant destinations in the city for people who want to live and work there.”

Location IQ director Greg Malempre said the changes had created particular challenges for retail developers, but said those challenges were positive for the industry.

Mr Malempre, whose business focuses on the evaluation of location decisions for property owners, said one of the most effective ways of achieving activation at a shopping centre was to provide high-quality food-related operations around the periphery of the centre.

“And if anything is growing in the current retail market, it is food catering.

“Retail spend is on the decline, so people have to think outside the square, and that’s where we see the best innovation.”

But Mr Malempre said while an ‘active edge’ was easy to achieve at a new-build centre, it was more difficult to retrofit an existing mall.

“There is an interesting contrast between what centre owners want and what retailers want, versus a planner’s guidelines and objectives around making these centres activity centres and not just shopping centres,” he said.

“Developers have to continue to expand their skill sets.

“Someone like Lend Lease or Stockland are really well-placed because they’ve already got a residential division, so they should be at the forefront.

“Other groups will have to get the experts in to help them deliver the product.”