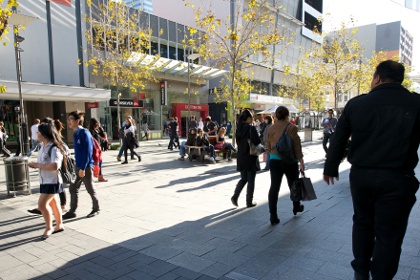 BRING IT ON: CommBank researchers say the retail sector is picking up, just in time for Christmas.

The retail recovery continued to strengthen in October, posting the strongest gains since September 2009, according to new research from the Commonwealth Bank.

The bank’s Business Sales Indicator, a key measure of economy-wide spending determined through levels of transactions through Commonwealth Bank point-of-sale credit and debit card terminals, rose by 0.4 per cent in October, following a 0.3 per cent increase in September and a 0.2 per cent increase in August.

The ACT was the only state or territory to record weaker sales in trend terms in October (down 0.2 per cent), while the strongest lift was felt in Tasmania (up 0.8 per cent).

In Western Australia, the BSI rose by 0.3 per cent in October.

In annual terms, just five of the 20 industry sectors analysed contracted in October, down from six sectors in September.

The weakest sectors were miscellaneous stores, down by 6.9 per cent on the previous year, and car sales rentals, which were both down 1.8 per cent.

“We are now seeing stronger signs of a recovery in consumer spending which will have associated benefits for businesses across Australia,” Mr Comyn said.

“These latest results are also important as they came before the November rate reduction which could indicate that there are further positive things to come on the back of the associated lift we have seen in consumer confidence.

“This will especially be important for retailers as we head into what many hope will be a busy Christmas season.”