What Christmas gave to Australian retailers, the bushfires are taking away, but there could be worse to come for shopkeepers and shopping centre owners when the latest international trends wash up here. 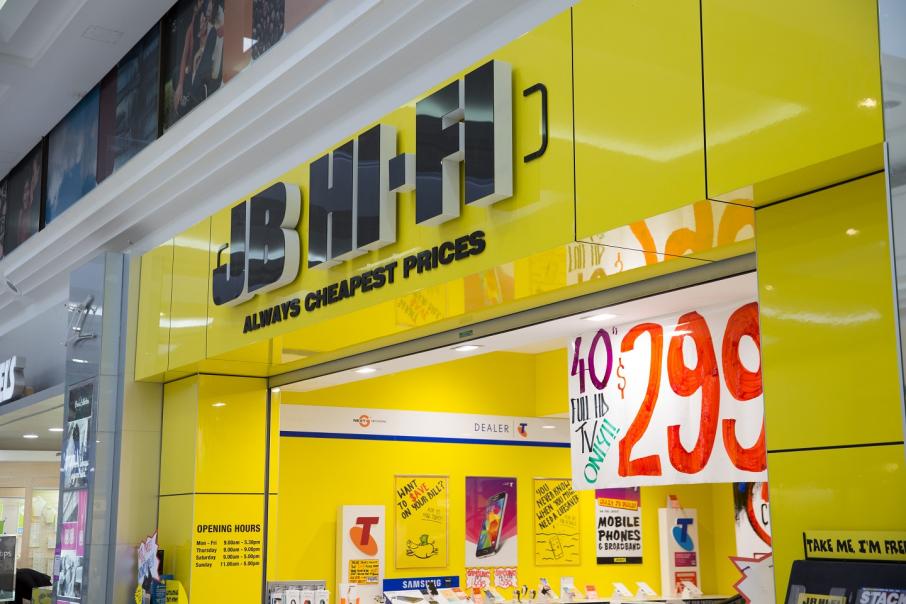 Retailers such as JB Hi-Fi could feel any reduction in consumer spending. Photo: Attila Csaszar

What Christmas gave to Australian retailers, the bushfires are taking away, but there could be worse to come for shopkeepers and shopping centre owners when the latest international trends wash up here.

The threat of reduced spending on discretionary items sold by big-name retailers such as Harvey Norman, JB Hi-Fi and Myer caused at least one investment bank to raise a red flag over the retail sector last week.

JP Morgan reckons consumers are less likely to spend at times of natural disasters whether it directly affects them or not, with even social occasions toned down (which means food and alcohol sales could decline).

A glimpse of the theory behind the bank’s comments on a bushfire-caused retail slowdown could be seen on the Australian stock market on Monday last week, when the All Ordinaries Index slipped by 0.5 per cent, whereas most retailers were down by 1 per cent and some by 1.5 per cent.

The fires, which have done most damage in the south and east of the country, are likely to have a lasting effect on the overall economy with national growth, as measured by gross domestic product, expected to be reduced by 0.2 per cent while the Consumer Price Index could rise by 0.4 per cent, mainly through higher food prices as fires in prime agricultural areas compound the problems of widespread drought.

The paradox of what’s happening is that retailing looked so much better just a few weeks ago, when most retailers were reporting robust pre-Christmas trading, including a sales increase of almost 1 per cent in November alone.

Discounts, such as those offered on Black Friday (November 29) might have had the effect of pulling forward transactions, though the overall result is one of encouraging consumers to spend.

Those happy days for retailers look like they’re over for 2020 as consumers zip their wallets, unwilling to spend at a time when others are in trouble.

According to JP Morgan, the national-troubles effect will be seen in all retail sectors, including restaurants. Hardware and building materials are likely exceptions, however, as a rebuilding process gets under way in fire-ravaged areas.

Wesfarmers, owner of the Bunnings hardware chain, could emerge as a winner from the fires, though management will be very careful to not say that.

Meanwhile, the picture in two countries with a broadly similar pattern of consumer spending contains a fresh warning about what lies ahead.

In the US, some of the biggest retailers recently reported falling sales over the all-important holiday period.

JCPenney, which operates 850 stores across the US and is the main tenant in many shopping centres, said sales in the Christmas period were down 7.5 per cent compared with the previous corresponding period, taking a whopping 20 per cent off the company’s share price.

It was a similar picture in Britain where one of the biggest department store owners, John Lewis, said Christmas trading had been worse than a year earlier, perhaps weighed down by Brexit concerns but also by a consumer shift to the internet.

The head of department stores at John Lewis, Paula Nickolds, appears to have paid a price for the poor holiday season, departing the company after three years in her role.

At the risk of sounding like a broken record it is blindingly obvious that a seismic shift first detected with the arrival of the internet the best part of 20 years ago is having an increasingly corrosive effect on traditional retailing.

A walk through any shopping precinct demonstrates the change affecting almost every shop owner and landlord, as a painful process of cost cutting and consolidation shows no sign of slowing in a brutal demonstration of survival of the fittest.

Coal mining has been singled out as the primary target for radical change as a result of Australia’s bushfire crisis, and while there are indications of some owners bringing forward their plans to quit the industry, there are no indications of a decline in coal production.

This seemingly illogical situation boils down to the fact that a mine might be sold but the new owner has a financial interest in maintaining or even expanding production.

Rio Tinto, for example, has sold all of its coal assets but the mines remain in production, albeit away from the public gaze.

A prime example is the Kestrel mine in Queensland, which was sold early last year for $2.25 billion to the privately-owned Australian fund-management business, EMR Capital, and the Indonesia coal miner Adaro.

Because the 5.1 million tonnes a year Kestrel coal mine is no longer part of an ASX-listed company, its public profile has been significantly reduced, though coal production remains the same and might even be increasing.

Morgan Stanley Wealth Management touched on the coal production issue in a research note sent to clients earlier this month, describing the situation as a dilemma.

“Changing ownership of thermal coal assets does not necessarily result in permanent (and responsible) mine closures, but could merely place them in the hands of new owners who could be subject to less scrutiny, accountability and transparency,” Morgan Stanley said.

The outlook for WA’s LNG industry appears to be brightening with reports that sector leader Woodside Petroleum is close to finalising a financial-fee structure for processing Browse Basin gas through the North West Shelf processing plant.

Aligning the interests of companies in both joint ventures has not been easy despite there being a number of common parties, but once the financial terms are sorted the Browse project can get down to finalising design, marketing and construction details.

In theory, most of the hard work has been done, though in practice there is always a fresh challenge on the horizon, which, in the case of all LNG projects, is the increasing focus on carbon emissions and a theory in Europe that gas might not be the halfway house between coal and a world powered solely by renewable energy.

And that leads back to where this column started – the changes likely to be forced on Australian business and households by this year’s bushfires.

In the case of WA LNG, that means increased scrutiny by the Environmental Protection Authority, which has already shown signs of not being fully aligned with what the WA government wants.