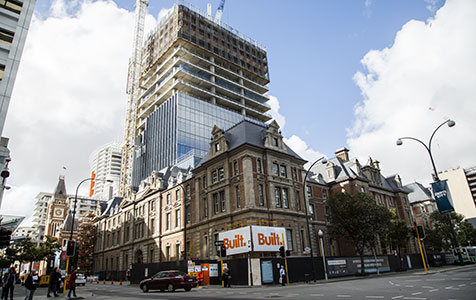 The once-neglected Old Treasury Building is being redeveloped into a 48-suite luxury hotel.

FJM Property has begun the leasing campaign for the retail and hospitality component of the State Buildings, part of the $580 million Cathedral and Treasury Precinct.

The developer has appointed Lease Equity to fill a total of 10 tenancies, ranging in size from 20 square metres to 300sqm, all of which could be adapted for retail or hospitality use.

Two of the larger hospitality tenancies had already been leased, FJM said.

Lease Equity managing director Jim Tsagalis said State Buildings was one of the city’s most significant developments currently being constructed, and would be prove attractive for potential tenants.

FJM is redeveloping the Old Treasury building into a luxury boutique hotel, comprising 48 rooms and suites as well as restaurant, meeting and spa and gym facilities.

Also incorporated in the precinct is a $280 million, 21-storey office tower being developed jointly by Mirvac Group and Singaporean developer Keppel REIT, as well as a piazza-style public square between St Georges Cathedral and the State Buildings, and a refurbishment of the Public Trustees Building, to deliver 13,000sqm of office space.

Kerry Hill Architects was responsible for the design of the hotel, while the City of Perth is developing a $33 million new library at the precinct, which is being constructed by DORIC.

“(The State Buildings) brings back life into some of the state’s best heritage buildings,” Mr Tsagalis said.

“Combining a luxury hotel, retail and food and beverage in this location has been exceptionally well received among some of the best operators in Australia.”