The free-falling iron ore price has hit the state’s coffers hard this year, but one of the state’s most respected resources authorities is pragmatic about the future, given the cyclical nature of the commodities sector. 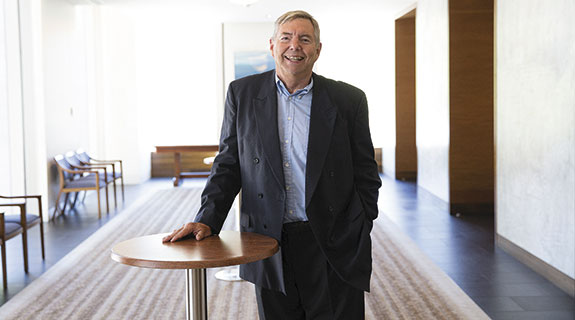 NEW FOCUS: Bill Tinapple has gone into consulting after 15 years with the DMP. Photo: Attila Csaszar

The free-falling iron ore price has hit the state’s coffers hard this year, but one of the state’s most respected resources authorities is pragmatic about the future, given the cyclical nature of the commodities sector.

“It’s not really a crisis as such, but it is a time to pause and look where we’re going,” former Department of Mines and Petroleum executive director Bill Tinapple told Business News.

Mr Tinapple, who this year was recognised for his contribution to the state’s resources sector as the recipient of both the Western Australian Gas Industry Development award and the John Doran Lifetime Achievement award, said maintaining a resources-reliant economy in the face of low commodity prices and increasing global competition was achievable.

“I would say that in WA we’re not nearly as severely impacted as past oil and gas recessions and what’s sheltering us, what’s buffering the impact? Well it’s the $100 billion worth of LNG (liquefied natural gas) projects ... and mining companies are still investing,” Mr Tinapple said.

He said despite Australia being tipped to become the world’s biggest LNG exporter, governments had their work cut out for them ensuring Australians benefitted from the next wave of projects.

In turn, he said, WA companies had to prove to multinationals their ability to build to Australian standards, shorten supply chains and improve efficiencies locally.

“As projects move from construction to operating phases, there will be new opportunities for local companies,” Mr Tinapple said.

“WA companies have to be smart about how they provide those goods and services, and target opportunities where they have the best chance of success.”

Debates over mutually agreeable rates of return, such as the state advocating for a James Price Point-located Browse project and Woodside Petroleum opting for floating technology, were only the beginning of the tough negotiations, he said.

Multinationals had considerable power, Mr Tinapple said, as was illustrated by US giant ExxonMobil continuing to do business with Russia following the US government enforcing sanctions against it.

“I think the balance of power is probably with the companies now. It’s not just legal power, the companies can mass technologies and people and consultants. Governments, despite the public perception, run fairly lean,” he said.