Resources sector invests in the arts

SUPPORTING Western Australia's arts sector is part and parcel of being a resources company, according to Oakajee Port and Rail (OPR) chief executive Christopher Eves. 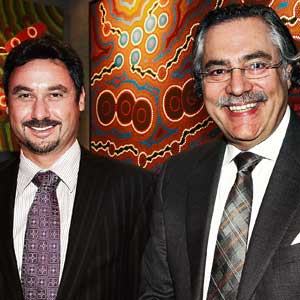 SUPPORTING Western Australia's arts sector is part and parcel of being a resources company, according to Oakajee Port and Rail (OPR) chief executive Christopher Eves.

Mr Eves told WA Business News it was essential mining and resources companies supported the arts in the local communities in which they operated, particularly indigenous artists.

OPR this month was involved in the Good Heart Mid West Aboriginal Art Exhibition at Perth's QV1, which showcased more than 100 contemporary and traditional works by indigenous artists from the Mid West.

About 40 artists from regional communities as far as Wiluna, Morawa and Meekatharra submitted pieces this year, the second year the exhibition has been held.

"We regard support for the arts being the first importance," Mr Eves said.

"Not only does it provide us with our licence to operate in the community, it ensures people who work with us, in particular our staff and our contractors, through the arts we share the same common values that we hold to be important.

"We regard this as a very important side of the values we hold that define how OPR is to operate in Perth and in Geraldton in the years to come."

Good Heart project manager Nan Rickards said that, with the support of OPR, the exhibition's artists had the opportunity to showcase their works to the broader Western Australian community, the first opportunity of that kind for many.

"These companies are sharing with the community not just the mineral wealth but the creative wealth in the regions they operate in as well," Mr Boston told WA Business News.

AbaF's latest arts sponsorship outlook survey of 39 companies involved in private sector support for the arts shows that business-arts investment in WA is expected to withstand the global financial crisis slightly better than Australia as a whole.

Thirty-eight per cent of the businesses surveyed in WA expect to decrease arts sponsorship over the next 12 months, compared to 49 per cent for businesses across Australia.

WA businesses are also more likely to respond favourably once the economy begins to recover, with 69 per cent indicating they would increase or maintain art sponsorship at present levels over the next 18 months, compared to 54 per cent for all of Australia.

Rio Tinto has an extensive commitment to the arts and was last year recognised at the WA Business and the Arts Partnership Awards. Better Beginnings, a partnership between the State Library of Western Australia and the Rio Tinto WA Future Fund, was awarded the Prestige Community Investment Partnership award.

BHP Billiton Nickel West has sponsored this year's Awesome International Arts Festival for Bright Young Things, a showcase of artists and performers from all over the world.