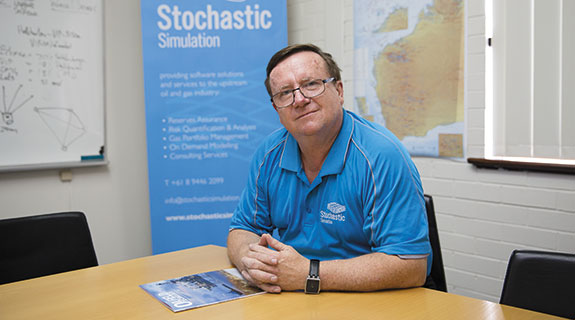 Its most recent move is the acquisition of new modelling technology 4DGeoStress from Predrill Stresses International, in a deal worth $5 million.

He said the company’s strategy was a disruption of the status quo.

“We do in minutes and hours what currently takes weeks and months,” he said.

One product, ResAssure, it claims, can perform modelling up to 1,000 times faster than existing products, and is cloud based, while another, GasAssure, was a finalist in the Australian Gas Innovation Award 2013.

4DGeoStress was particularly innovative, Mr Mullins claimed, because it introduced time into calculations of rock stress and made predictions more accurate.

Mr Mullins said Stochastic would be in negotiations with some of the world’s largest oil companies for use of its software, which did not require substantial data processing facilities.

While the company pursues international opportunities, He was upbeat about the effect of the downturn in the oil price, suggesting companies would seek efficiencies and cost reduction, and would find great advantages from using cloud-based software.

Other local technology startups to have made waves in oil and gas include Cool Energy, which was acquired by Shell, and Sensear.

Cool Energy was established at Curtin in 2003, with plans to commercialise carbon dioxide extraction and storage technology for use by natural gas producers.

After investing $4 million through its Technology Ventures Fund subsidiary, Shell bought a majority stake in the company in 2009.

A former Business News Rising Star finalist, Sensear has achieved success in a range of industries, including oil and gas.

Companies, including BP, ConocoPhillips, Chevron and Shell, have adopted the company’s noise-cancelling headphones, which enable communication through Bluetooth mobile phones and two-way radios.

Sensear is another child of the university sector, with the technology invented by Sven Nordholm at the Western Australian Telecommunications Research Institute, a joint venture between the University of Western Australian and Curtin, and then launched globally in 2007.

Business News revealed last year that a joint initiative between Curtin and Woodside, Project Echo, had used technology to boost productivity in LNG project construction, while a team at UWA was working to develop an FLNG technology hub.

Both projects could give the state future innovation commercialisation opportunities.