Improving the diagnosis and management of patients with fatty liver conditions was the motivation for the 2014 WA Innovator of the Year winner, Resonance Health. 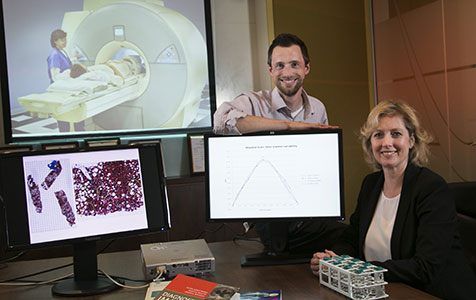 Improving the diagnosis and management of patients with fatty liver conditions was the motivation for 2014 WA Innovator of the Year winner, Resonance Health.

The Claremont-based ASX-listed company was presented with the top prize of $75,000 today for its HepaFat-Scan, a non-invasive technology that enables magnetic resonance imaging scanners to measure the concentration of fat in the human liver.

“It will aid in the diagnosis and management of liver damage and disease and it will no doubt transform and even save lives.

“This year’s winners and finalists have developed novel solutions that will benefit a number of industry sectors including health, defence, marine, gaming, ICT, oil and gas, mining and recreational boating, showcasing the depth of talent we foster here in Western Australia.

“The state’s prosperity relies on a business environment that is productive, innovative and internationally competitive. Local innovators and entrepreneurs, and the ideas they continue to commercialise, make a significant contribution to achieving this prosperity.”

In late October, Resonance Health said it made a net loss after tax of $72,000 for the full year, which was a $130,000 improvement on the previous year.

It increased its cash holdings from $1.1 million to $2.1 million, aided by the $1.27 million raised from a rights issue in April, and $650,000 raised as part of the shortfall from the entitlement offer.

Managing director Liza Dunne said the company's focus for the coming year was to explore commercialisation initiatives for the HepaFat-Scan and continue development of an MRI liver fibrosis test.

"Following the capital raise completed mid-year, we have the funds to invest in these two key initiatives," Ms Dunne told Business News.

The company plans to pilot the HepaFat-Scan into markets in the US, Europe and Asia.

Meanwhile, other top accolades awarded at the 2014 WA Innovator of the Year awards included The University of Western Australia for developing a microscope-in-a-needle that allows surgeons to perform safer surgery, and Henderson-based Franmarine Underwater Services for a contactless in-water hull cleaning and filtration system.

The Woodside Oil and Gas encouragement award was won by One Atmosphere in Port Kennedy for a lightweight post-crash emergency buoyancy system for helicopters.

The Amcom and Cisco ICT encouragement award was won by Joondalup-based CommunityToGo for a smartphone app that helps communities attract new members, enhance communication and better engage and connect.

Resonance Health's share price closed 5.8 per cent higher at the close of trade today at 3.6 cents per share.