Managing the state’s economic transition was the main focus of today’s cabinet reshuffle, Premier Colin Barnett said, with tourism and agriculture in his sights as key growth industries. 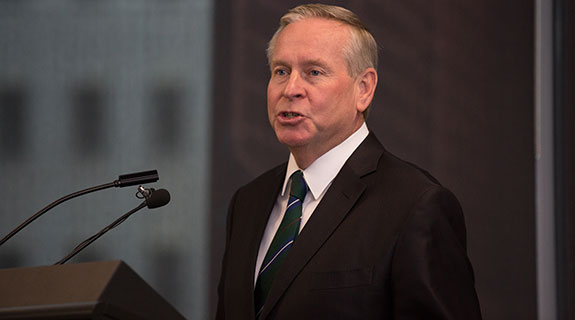 Premier Colin Barnett has added tourism to his portfolio.

Managing the state’s economic transition was the main focus of today’s cabinet reshuffle, Premier Colin Barnett said, with tourism and agriculture in his sights as key growth industries.

Mr Barnett pitched the changes as a broadening of the government’s economic focus, with agriculture and tourism becoming increasingly important.

He touted stage 2 of the Ord River expansion, the Elizabeth Quay development, and Yagan Square as examples of how the government had been forward thinking in these portfolios.

Mr Barnett will take the tourism portfolio and retain science.

He noted that the team was younger than the Labor opposition, while having more experience.

Mr Day, who had been a health minister under Richard Court, will return to that portfolio, moving from planning, while Mr Marmion will take state development from Mr Barnett.

He will hand mines and petroleum to Churchlands MLA Sean L’Estrange, who joins the ministry for the first time.

Mr L’Estrange will take the small business portfolio from Joe Francis, who instead added fisheries to his corrective services responsibilities.

Mr Nalder’s focus will be on market development, and he will work in part with Mr Marmion, who’s state development department will take on an agricultural bent as part of the government’s economic broadening strategy.

Meanwhile, Donna Faragher was promoted to planning and disability services.

Ms Faragher had previously served in the environment portfolio before leaving the ministry to have children.

Mr Barnett said the addition of a new woman in cabinet and the return of Ms Faragher demonstrated the state government’s effort to be inclusive.

Former deputy premier Kim Hames, who is retiring, and Ken Baston, both moved out of the ministry.

Business group the Chamber of Commerce and Industry of WA welcomed Mr Barnett’s move into tourism.

Chamber chief executive Deidre Willmott said it was a significant move, as tourism was a major employer.

“More than 28 million visitors spent around $9 billion in Western Australia in 2015, so the business community is pleased to see the premier and the state government prioritising this important industry,” she said.

“Business looks forward to working with the new-look cabinet and believes the premier’s leadership in the tourism portfolio is an opportunity to promote Perth and Western Australia to the rest of the world as a great place to study, invest, visit and live.

“The government should ... continue its focus on cutting red tape, deregulation and asset sales, where the private sector can provide the service more efficiently.”

Tourism Council WA chief executive Evan Hall said the industry was pleased that the portfolio stayed in the hands of a senior minister.

“Having the premier as tourism minister gives the industry a high-priority across all government portfolios, leading the way on major projects such as the Perth cable car, promoting Western Australia and building up the state’s major events calendar,” he said.

“It is a critical time for the tourism industry in WA as we compete with other destinations within Australia for visitors while the Australian dollar is comparatively low and international conditions make the country an appealing destination.”

The Australian Hotels Association and Toursim and Transport Forum both were supportive of the premier’s move.

Health, culture and the arts

Paliamentary secretary to the premier

Parliamentary secretary to the tourism minister

Parliamentary secretary to the agriculture and food, transport minister

Parliamentary secretary to the commerce minister

Parliamentary secretary to the water, sport and recreation, forestry minister

Parliamentary secretary to the planning minister