Research the winner in lottery 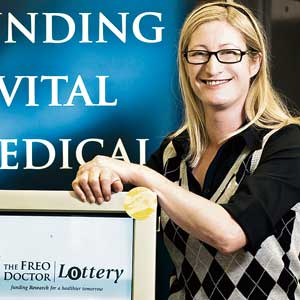 The Freo Doctor Lottery operates in a similar way to a regular Lotterywest game or raffle; but in this case, the lottery is run on a participating company's behalf, where each week half the prize pool is distributed to the not-for-profit foundation and the other half to the company.

Employees are invited to be included in a draw each payday and can select how many $2 chances they would like to purchase.

The money is deducted from an employee's pay, much in the same way as superannuation contributions, and can be terminated at any time.

"We introduced a lottery to meet our need for a mostly recession-proof way of funding some of our medical research grants," she told WA Business News.

"When times get tough, there's nothing people like more than winning a bit of extra cash.

"We also liked the fun aspect of the lottery and never get tired of seeing the winners' happy faces."

Ms van Dongen said it had become difficult to raise funds in recent years and that in times of an economic downturn, every contribution counted.

Foundation spokesperson Sonia Gurbiel said the Freo Doctor Lottery is easy to play and can be set up for any medium to large workforce with little effort.

Under state gaming laws the maximum prize pool for a business is $500.

"But this is a great way for businesses who don't have a sponsorship program or anything like that to really show their philanthropy by getting involved," Ms van Dongen said.

"It means that they are not only offering workers potential bonus pay through the prize pool, which in times like these is very helpful, but it means the company can use it as a PR boost to show people that they are doing something for their local community."

Austal Ships, which has about 300 workers currently participating in the Freo Doctor Lottery each week, joined the fundraising venture to boost employee morale and support a worthwhile cause.

"It wasn't hard to find staff willing to support such a great cause," Austal spokesperson Courtney Gordon said.

"Staff love having the chance to take home the prize pool each week and we now have so many players that we're funding our own medical grant each year."

Austal's support is helping the foundation to conduct world-leading research into iron overload disease, otherwise known as haemachromatosis, which affects one in 200 Australians.

The shipbuilder's staff have also been given the opportunity to visit the laboratory to see the cutting-edge technology used to conduct the research and have experienced on-site haemachromatosis checks by researcher Professor John Olynyk.

Ms van Dongen has called on more Perth businesses to play the lottery so the foundation could conduct further medical research into areas such as cancer, diabetes, heart and liver diseases, Alzheimer's and anaphylaxis.

Located at Fremantle Hospital, the Fremantle Hospital Medical Research Foundation has conducted research since 1996, operating as an independent charitable trust that receives no direct government funding and relies on donations and its own fundraising endeavours.