Personal experience is the driving force behind Kelly Haywood’s determined efforts to motivate and inspire others to help prevent suicide. 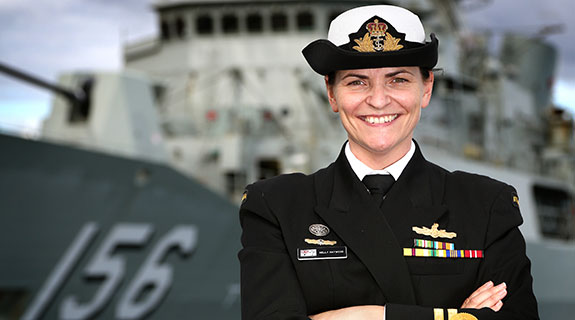 Personal experience is the driving force behind Kelly Haywood’s determined efforts to motivate and inspire others to help prevent suicide.

Kelly Haywood’s fighting spirit is not surprising, given the challenges she has faced; but her ability to motivate people through leadership, driven by a deeply held belief that things can get better, is inspiring.

As a young child growing up in Tasmania, Ms Haywood lost her mother to suicide.

She was raised by her older brother and his wife, then joined the Navy when she turned 18 – a decision she still believes is one of the best she’s ever made.

For eight years she travelled the world as a sailor, working her way up from the lowest rank as a recruit, until her natural ability and organisational skills convinced her to pursue a career in logistics.

“So I changed over to an officer, where I started again from the bottom and worked my way up,” Lt Commander Haywood said.

“When I joined as a sailor, I never imagined I would be a lieutenant commander and head of department on a major warship. Every day I go to work and get to make a tangible difference.

“I have been on peacekeeping missions, performed border protection operations and I am currently deployed to the Middle East for the third time.”

Lt Commander Haywood’s rise through the ranks was aided by a mission, where she had one month to organise and deploy a complex submarine search and rescue vehicle from halfway across the world.

If she couldn’t do it, the Navy’s submarines wouldn’t be able to go to sea.

“It was high visibility and I had no staff,” she said.

Ever ready for the next challenge, Lt Commander Haywood is now focused on working her way up to the position of commander and officer in charge of the Royal Australian Navy maritime logistics school.

Throughout her career progression she has also passionately pursued fundraising and awareness initiatives to prevent suicide.

Since her mother died, suicide has also claimed two close friends and two shipmates, who were devastated when they saw colleagues killed in action in the Middle East.

“While I was able to provide (other colleagues) that strength and guidance, over time I realised that all these critical events had started to take a mental toll on me and in order to help others, I needed to be open about seeking help,” Lt Commander Haywood said.

So she began speaking publicly and created an initiative called Choose to Live, Love your Life as a vehicle to raise money and awareness for charities aiding suicide prevention.

In the past 12 months, she has raised more than $30,000 for beyondblue and Lifeline.

Lt Commander Haywood is also writing a book and is involved in the development of a smartphone app to link people to suicide support agencies.

“I will spend the rest of my life trying to prevent post traumatic stress disorder and suicide ruining someone else’s life,” she said.

“I realised it didn’t matter how unfortunate my history had been, I was in a position to make a difference.”

Through setbacks and success Lt Commander Haywood has learned that her behaviour and actions can make a difference.

“Each and every day I try and motivate and inspire my team to be the best they can and to have the strength of character to do what is morally right,” she said.

“My story is unique. My story shows what can be achieved by a woman in the Australian Defence Force, or any career, no matter what challenges life throws your way.”