The latest round of annual reports has revealed some highly unusual movements in chief executive remuneration, including at Monadelphous Group and Mineral Resources. 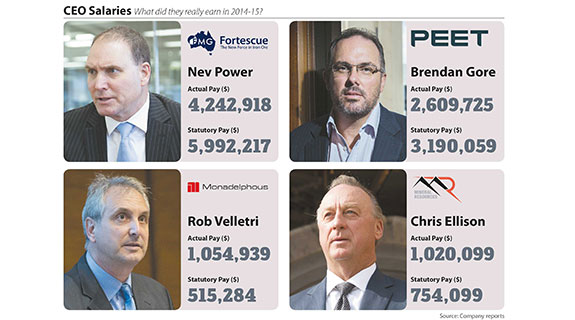 The latest round of annual reports has revealed some highly unusual movements in chief executive remuneration.

It was a similar story for Mineral Resources chief Chris Ellison, whose reported remuneration was down 60 per cent to $754,000, according to figures released this month.

Both companies have been adversely affected by the slowdown in the mining sector, but fared better than most of their peers, so surely that can’t explain the fall.

In truth, the dramatic declines are a result of the arcane accounting standards that govern the remuneration reports published each year by listed companies.

These ‘statutory’ reports include the estimated value of future equity awards under long-term incentive schemes, which may or may not be earned, or ‘vest’.

However a growing number of companies are trying to bring more clarity to executive remuneration by publishing an alternative measure.

Fortescue Metals Group, for instance, reported that chief executive Nev Power’s statutory remuneration was $5.9 million, but his ‘actual’ or ‘take-home’ pay was substantially lower, at $4.2 million.

“Most larger companies are reporting take-home pay, there is definitely more and more,” ASA head of research, Anna Lau, said.

The trend does not appear to have spread to smaller mining and exploration companies, however, where the use of share options and other equity incentives means that statutory remuneration can be highly misleading.

Writing in Peet’s annual report, chairman Robert McKinnon encouraged shareholders to look at take-home pay, or what he calls the cash value of remuneration realised.

While statutory pay includes the value of potential future awards under the company’s incentive scheme, take-home pay is limited to salary and cash bonuses actually paid and the value of shares actually issued to its executives.

At Monadelphous, Rob Velletri’s reported remuneration in recent years has included an estimate for the value of share options the company had expected would vest.

It was forced to reverse Mr Velletri’s income by $539,000 in the 2015 report because the company failed to meet one of the performance hurdles – earnings per share were required to grow by 10 per cent per annum over the vesting period.

The strange movements at Mineral Resources have a slightly different explanation.

Chris Ellison’s statutory 2014 income was $1.9 million, including the value of annual bonuses earned in FY13 and FY14, along with share options that were granted subject to future vesting conditions.

In reality, the FY14 bonus was paid, and repaid, in the 2014-15 financial year, so it had zero impact on his actual income.

For the record, his actual income to just over $1 million, down slightly from the prior financial year.