Wars produce winners as well as losers, and while Russia’s invasion of Ukraine is not classified as a hot war, yet, there are signs emerging that one of the winners will be a long way from the action – Australia. 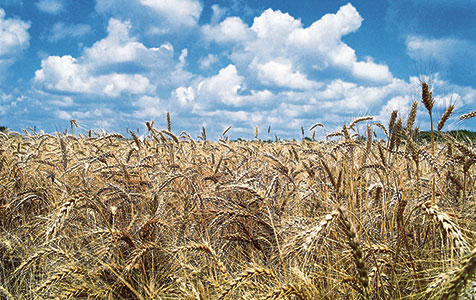 Ukraine is one of the world's biggest wheat producers.

Wars produce winners as well as losers, and while Russia’s invasion of Ukraine is not classified as a hot war, yet, there are signs emerging that one of the winners will be a long way from the action – Australia.

The first sign of events in Ukraine delivering a positive surprise for the Australian economy is a 5 per cent rise in the price of internationally traded wheat.

There are no signs yet that wheat exports from Ukraine – one of the world’s biggest producers of wheat and corn – have been affected by the current unrest, but there is concern that a destabilised Ukraine will become a less-reliable supplier.

It’s a similar story with other commodities influenced by Russia’s attempt to reclaim a region that it has historically ruled, whether the locals like it or not.

Gas prices, like wheat, are on the rise, not because there has yet been evidence of Russia limiting exports to Ukraine or countries further west in Europe, but more because there are fears that crimping the flow of gas will either punish opponents or push the price up at a time when Russia needs the cash to pay for its military adventures.

Iron ore and manganese are also of significant importance to Ukraine, and while neither is a major export they do underpin that country’s most important heavy industry – steel production.

Gold, also not a Ukrainian export, is another commodity being affected by Russia’s invasion of its southern neighbour, with the price rising strongly over the past week as international investors duck for cover.

Tick off those four items – wheat, gas, iron ore and gold – and you see an interesting parallel with another part of the world, Australia, and particularly its most important exporting region of Western Australia.

What’s happening in global markets is termed a ‘supply-side shock’, and while WA can sometimes be on the losing end of such an event, this time around there is the potential for a win.

Local wheat farmers, for example, are already benefiting from high prices and last year’s bumper harvest. They can expect more of the same, as long as seasonal conditions are favourable.

Gas exporters can also expect an improved market with European gas price already ticking up, and with gas importers elsewhere looking more closely at the question of reliability and less at price.

Even Asian buyers of LNG will be thinking more closely about the source of the gas they need.

While there is the prospect of the US entering the market sometime in the next few years, there is also the possibility that the US government will be less than enthusiastic about permitting large volumes of gas exports at a time when the global energy market could be influenced by events in Ukraine – just as they are now influenced by events in the Middle East.

Rather than become involved in a geopolitical tug-of-war over gas supplies, it is likely that gas buyers in Japan and China will see the value in continuing to deal with Australia, their most reliable and most politically stable supplier.

The point about the situation in Ukraine is that despite very obvious differences with WA, some parts of its economy mirror those of WA. And while not a direct competitor, Ukraine’s supply of wheat or its purchases of gas do have an effect on global markets.

A recent breakdown of the Ukrainian economy listed metals, mainly iron and steel, as the country’s biggest single export with an annual value of $US21 billion. Food and agricultural products, mainly wheat and corn, came third at $US6.2 billion.

WA farmers and exporters of iron ore, gas and manganese will be watching events in Ukraine very closely.

Even if the Russian invasion is a short-lived affair and prices for commodities influenced by what’s happening quickly stabilise, the long-term effect on markets will favour WA in terms of the critically important issue of supplier reliability.