LIKE many apprentices, Mark Stewart dreamed of establishing his own business rather than working for a wage. 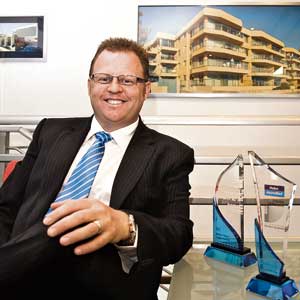 LIKE many apprentices, Mark Stewart dreamed of establishing his own business rather than working for a wage.

Fifteen years on, he is an example of how a 'tradie' can build a successful business despite starting with very limited resources.

His company, Classic Contractors, has 30 staff and an annual turnover of more than $3 million, offering maintenance, painting and construction services.

Mr Stewart started the company with little more than the drive to own his own business and a credit card with a $3,000 limit.

A testament to his success has been Classic Contractors winning of the Dulux Accredited Painter of the Year three years in succession.

"There is so much more to the business than simply knowing how to paint," Mr Stewart said.

For a business like Classic Contractors, which relies above all on providing good service to its clients, Mr Stewart said it's about whom they employ.

"I think it's important to get the right person, that's where I think we're different to other people," he said.

A part of being the "right person", according to Mr Stewart, is the ability to work well in a team environment.

"I always take a view that I want to surround myself with people who are better than I am," Mr Stewart told WA Business News.

"A lot of people are a little ego-driven; what I like to do is surround myself with people who work for us."

Mr Stewart is a strong believer in employing staff rather than using sub-contractors.

"We don't sub-contract; the people who work for us are employees and we have better control over producing a better product," Mr Stewart said.

He also has a policy of 'brutal honesty' in the workplace, coupled with rewarding staff members who perform well.

Mr Stewart said he tackled any potential IR disputes by looking after his staff, as he would rather provide employees with the necessary tools for the job, ensuring safety, presentation and output.

"I'm big on presentation. If you work at McDonald's, you don't rock up in a Hungry Jack's uniform," he said.

"When a person is inducted, we'll clothe them, give them a first aid box and the right tools and give them some additional training."

"As an apprentice you may have reported to someone, and now that person is your client, the relationship has changed," he said, adding that maintaining close links with clients has helped the business.

"Out of difficulty arises opportunity; clients might be tight on cash and we see that as an opportunity to work closer.

''When they don't talk that's when it concerns me."

An ongoing challenge for the business is dealing with competition, which Mr Stewart said is getting more intense.

"You might have been one of three pricing a job in the past few years, now it's gone to seven or eight."