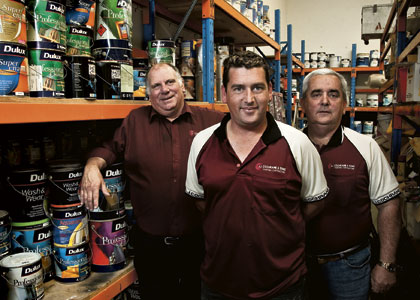 NOT many SMEs can boast almost 80 years in business, but for AJ Cochrane and Sons managing director Stephen Cochrane it’s all about continuing the legacy and reputation of the painting business established by his grandfather.

Malaga-based AJ Cochrane and Sons was set up in 1933 by Arthur Cochrane, before being passed onto his sons, Jack and Bill, in 1957.

Mr Cochrane has fond memories of joining the business as a 15 year old in the 1970s.

“I came in to the business after leaving year 10; I did a five-year apprenticeship then worked in the business for another few years after that,” he said.

“My father (Jack) and uncle (Bill) were very good to me with regards to the training they gave me … they gave me a lot of advice that you simply couldn’t get out of a text book.”

In 1985, Mr Cochrane took over the business from his father and uncle.

“When I was about 30, dad retired and passed the business onto me. I got the name, two vans, a small amount of scaffold and about eight staff,” he said.

“But I also got a whole lot of knowledge. Dad always told me to do my best, look after customers to the best of my ability, know the trade and be willing to change with the times.

“I run the business by those principles every day.”

Mr Cochrane has grown the business to 32 staff and provided painting services to the likes of Coles, Woolworths, QV1, Doric and Australand.

In addition, the company has also won the Master Painters Australia WA Association Awards of Excellence for 10 out of the past 11 years.

Mr Cochrane said like many other businesses, the company is still feeling the effects of the GFC.

“The GFC impacted on everything, things just stopped overnight,” he said. “And it’s difficult because we’re not making the profits we would like and we are working harder to get the work in the door.”

Not wanting to make staff redundant during this period, Mr Cochrane made the decision to keep staff on and take the financial hit.

With work for painters in the Perth metro area becoming scarce, Mr Cochrane and his right-hand-man, supervisor Greg Migrow, decided to reinvent the business and look to the regions for work.

“The whole of Australia is in lockdown mode, so we had to make sure we secured work going into the new year,” Mr Migrow said.

“So we have looked to the country areas for work and have recently undertaken painting in Esperance for Queensland Rail.”

AJ Cochrane and Sons has also worked on projects in Kalgoorlie and Kununurra, and will target Geraldton after Christmas.

Mr Migrow said the company used its previous experience in the regions and its relationships with builders to secure new work in the country.

“We were well versed in doing work in the regions for the Coles/Myer Group painting their Coles stores, so we knew we were already capable of sending workers out there; it was really about applying the same philosophy to a bigger scale,” Mr Migrow said.

Aside from dealing with the aftermath of the GFC, finding young staff with the right attitude continues to be a problem for the business.

“Trying to train young apprentices has been the biggest challenge for us because they are not interested in working overtime, they are not willing to go to the country to learn and they’re only interested in coming to work from seven to 3.30 and getting their pay at the end of the week,” Mr Cochrane said.

“These apprentices come in and they want what the tradesmen get and more with no skills; they need to start changing their mindset at school, that is, you need to earn a job and its not your right to be gifted one.”

Along with expanding the business regionally, Mr Cochrane hopes to do more paint work in Perth hotels, after recently completing a paint job as part of the refurbishment of The Pan Pacific Hotel on Adelaide Terrace. He also has plans for his 27-year-old son, Ben, who joined the business five years ago, to take over when he retires in the next five to 10 years.

“We are hoping to pass 80 or 90 years’ experience on to Ben, which is going to be quite difficult because a lot of the younger people don’t want to do things the old way,’’ Mr Cochrane said.

“But I can assure you, he will learn those ways and we will succeed, because that’s the way you’ve got to run a business.”