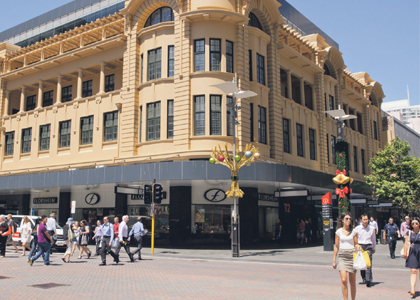 A REFURBISHED heritage building in the CBD that lay vacant for 30 years has been fully leased, with oil and gas explorer Buru Energy joining occupants CKA Risk Solutions, Nexia and Solid Gold.

Buru Energy, which will take out the second floor of the 7,500-square metre, four-storey building, is expected to move in by February.

The Art Deco building, at 88 William Street on the corner of Hay Street, dates back to the early 1920s and previously housed the now-defunct Economic Stores and later Walsh’s.

Palassis Architects took on the task of designing the restoration of the building and the refurbishment was undertaken by Diploma at a cost of $15 million, which started in late 2010 and is due to be completed by early next year.

As well as leasing the top floor of the building, insurance broking firm CKA acquired signage rights for the building and is the first of the four major tenants to have fully moved into the new premises.

CKA director Stuart McLean told WA Business News the firm’s move to the city from its former West Perth headquarters was driven by an expansion of the business in recent years and a desire to find an office that reflected its unique position in the local market, as a globally connected mid-tier broker.

“We’ve just run out of space and we needed to look for another premises,” Mr McLean said.

“We were looking for something a little different, I guess, than the standard old level 17 of some office building somewhere or other and we really just stumbled across this in our search and were interested by the concept of it, if nothing else.

“The city’s starting to regenerate itself a little bit so taking advantage of the older buildings and the refurbishment that’s being done was attractive to us.”

CKA employs about 40 staff but Mr McLean expects that number to grow as the company continues to attract clients, particularly in the resources sector.

Mr McLean said “a tremendous amount of thought” went into finding a building, which would provide CKA employees with a quality working environment.

“We’re very focused on quality of service delivery to our clients and having quality people providing that service,” he said.

“The way that we can attract and retain quality people as we do is by providing a really good working environment.”