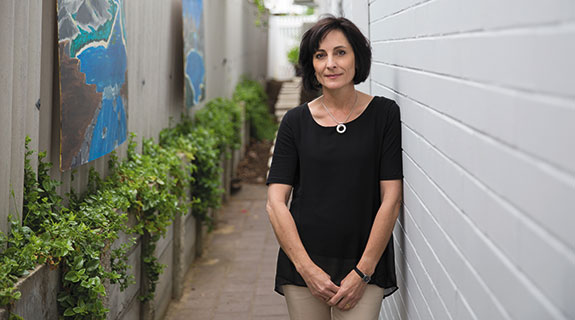 FLOW-THROUGH: Helen Pearce believes there are broad benefits when refugees and asylum seekers are welcomed into a community. Photo: Attila Csaszar

Helen Pearce says her most difficult moments are those times she has to look a refugee in the eye and tell them she can’t help them bring their family into the country.

And given the current demand on her services as CEO of Victoria Park-based The Humanitarian Group, Perth’s only dedicated legal organisation for new arrivals to Australia, it’s a message she delivering more frequently.

The not-for-profit organisation worked with more than 2,300 asylum seekers last financial year, many of whom have experienced trauma and torture, but was only able to help 68 per cent of them, sometimes with just a referral to pro bono lawyers or other very limited assistance.

This is despite a rebrand of the organisation (originally known as CASE for Refugees) and a crowdfunding campaign that boosted funding by 186 per cent in 2014-15 (worth about $117,000), as well as Perth lawyers volunteering 48 per cent more hours compared with the previous period.

With demand outpacing THG’s ability to serve, the organisation’s 16 staff and 100 volunteers determine which clients they can help by first ensuring they have no ability to pay and by prioritising the most vulnerable or at risk.

To help the approximately 2,000 asylum seekers now living in Western Australia who arrived by boat between August 2012 and December 2013 apply for TPVs, THG has also set up Perth’s only service that educates and assists with that application process.

Ms Pearce said an important part of THG’s work was explaining to clients what their options were, particularly with regard to family reunions.

“It makes up a reasonable component and I think it’s a very important part of what we do. It’s always difficult when you explain to people the benefit of the work that you do, that saying ‘no’ is just as important in many respects as saying ‘yes’,” she said.

Ms Pearce said while many refugees were devastated to hear they couldn’t be reunited with certain family members, having the law and their options explained to them allowed them to make choices, such as trying to move family members to a safer place or getting a job to send them money.

“The chances of getting a mother in are next to nil,” she said.

“The current waiting time on a non-contributory parent visa to bring in a mum is 25 years.

“There’s a contributory parent visa (wait) of about two years, but you’ve got to have about $40,000 to do it, which none of our clients have.”

However, Ms Pearce said the vast majority of THG’s family reunion cases had some sort of viable option.

“If we had better resourcing we would help all of them through that process with complete assistance. What we tend to do with those is make another call based on need, is it orphan relative children, is it women and children at risk overseas, is it from a country where they have a higher prospect of being granted a visa, those ones we will try to give full assistance to,” she said.

A growing part of THG’s work relates to the federal government’s recent crackdown on cancelling visas for people who receive jail sentences greater than 12 months.

“The implication of that for someone who came from a humanitarian background, who was a refugee, is that you can’t be returned to the country from which you have gained protection, which means ... indefinite detention in Australia,” she said.

“So we’re working on a number of levels here because, where we can, we’re trying to educate and get in at the early stage before people commit offences or if they have committed an offence, to try and ensure from a sentencing perspective they’re not sentenced to anything more than 12 months unless that’s required for that particular crime.”

Ms Pearce said through its rebrand and crowdfunding initiatives, THG had stepped up efforts to secure greater community support for growing demand for its services.

The NFP’s aim is to reduce its reliance on federal government funding, which makes up more than half of its $838,000 annual operating budget.

“We saw not only the immediate need for more money, and clearly the changes in the law and the increased demand for our services has made that very stark that we need money now, but it’s more of a longer-term strategic plan that community legal centres on the whole need to look at how they become more sustainable,” Ms Pearce said.

She said THG was especially keen to secure corporate sponsorships, but not just from Perth’s legal fraternity.

“The work that we do, if you stop to see where the longer-term benefit of assisting people in terms of their ability to settle in the country and be able to become productive residents of Australia is such that it should appeal to any and all corporates,” Ms Pearce said.

“It’s around human rights and equality and access to justice and that should not be limited to people who have an affinity for asylum seekers or the law.”