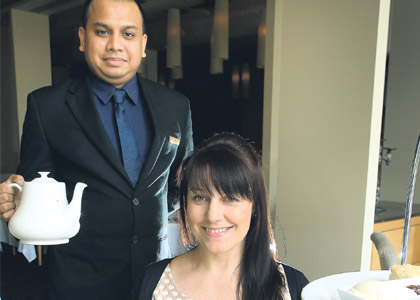 MICHELLE Milton is one of a small group of aficionados in demand from big business worldwide to bring a touch of class to product launches or major events.

Ms Milton’s area of expertise is high tea, and Virgin Atlantic, Sony Universal, Twinings and numerous international five-star hotels have called on her intimate knowledge of the social convention to help boost their businesses.

It’s that reputation which has enabled the Perth woman to develop a substantial online business around a website that started as a case study on building an online community.

The High Tea Society website was launched about four years ago as a simple wordpress page - essentially one of the most basic platforms on which to build a blog.

From an outsider’s point of view, the site was a no-fuss source of information about Australian venues offering high tea, including reviews and photos of what was on offer.

But for Ms Milton it was much more. As a digital media consultant, she started the site as an exercise in developing an online community across existing and emerging social media platforms such as Facebook, Twitter and Pinterest.

Ms Milton had previously consulted for a number of major organisations - running networking events for the advertising industry using online and digital media in London, and producing digital strategies for the Game Developers Association of Australia and for the developer of Melbourne’s major CBD precinct, Digital Harbour.

“Because they were digital businesses I had to use digital and social media in the way I shared their stories, so I was always testing out and exploring new platforms,” Ms Milton told WA Business News over a cup of English Breakfast at the Pan Pacific.

A year and a half later, and having featured as one of SBS TV’s Featured Foodies, Ms Milton’s email subscriptions had grown to about 1,000 and about 4,000 people had become fans of the High Tea Society on Facebook.

“It was sort of at that 18-month mark when I was getting so much amazing feedback and so many more people were reading it and contacting me than I ever expected that I realised it was unique and I should grow it,” she said.

The High Tea Society now has a subscriber base of about 35,000 across all social media and email. The scope has been expanded from being just Australia-focused to now being a global site with 10 writers in various locations around the world.

Ms Milton’s popularity and reputation as a high tea expert has even drawn attention from big brands, which have recognised the influence she has over that 35,000-strong subscriber base; she hosted the launch of Virgin Atlantic’s high tea offering on its upper class services between Sydney and London, and at Sony Universal’s release of Downton Abbey on DVD.

“The mechanics is all about sharing that (offer or competition) on social media ... what a brand is getting by buying into and running a campaign with a blogger is leveraging that reputation, and any good blogger is not going to embrace any advertising dollars from a brand they don’t completely believe in,” Ms Milton said.

Advertising from the High Tea Society now accounts for about 20 per cent of Ms Milton’s total income (she is still involved in freelance digital media consulting).

According to Ms Milton, the key to her success is providing good content that is readily found via Google.

“It’s about writing good content, having frequent posts and new content on your website; it’s about having other credible websites linking to you and building your website in a way that’s going to be readable by search engines,” Ms Milton said.

“You need to understand your community, listen to them, ask them what they want, and actually create an absolute niche that you become the expert in and the go-to place for that information because they can’t find it anywhere else.

“We have so much information available at our fingertips these days that when someone packages it and customises it to be given to you in just the way you want it - then that’s what people are going to look for.”

Having moved back to Perth after five years in Melbourne, Ms Milton said the hospitality scene in Western Australia had so far failed to tap into the potential of leveraging off existing social media communities.

“A lot of brands are still quite traditional and they’re still in those very early days of how do they do a deal with a blogger or online community; there are not many people who actually understand how to do that yet,” she said.

“In the food space I’ve only seen a handful of organisations in Perth that ‘get’ social media and are on it - there are a lot that are missing the opportunity.”

At the same time, Ms Milton considers there to be a lack of effective ‘middle men’ bloggers off whom brands can leverage.

“There’s a lot more room for Perth-specific content to be created; I just look at that whole tourism, food, lifestyle market in WA - people want to share those experiences,’’ she said.

“People want to look at beautiful things and places and say ‘I want to go to that hotel in Margaret River’.”