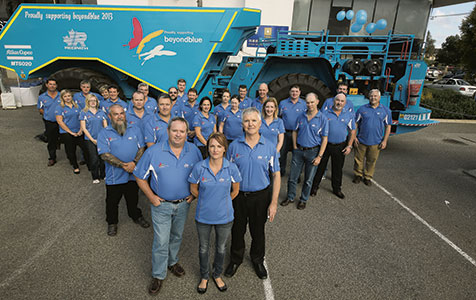 Mining contractor Redpath has painted a 60-tonne truck blue to raise awareness about depression and anxiety in the mining industry.

Nicknamed 'Papa Smurf', the truck will soon be working at Silver Lake Resources' Murchison gold mine.

Redpath will donate money to mental health charity beyondblue for every hour and tonne of material moved by the truck at the mine.

Redpath marketing and communications manager Rhiannon Vines said the truck "is expected to work between four and five thousand hours this year, so we are aiming for a fund-raising target of $50,000 for beyondblue, which would be a fantastic achievement".

Ms Vines said there needed to be more awareness about depression and anxiety in the mining industry. She hoped the launch of 'Papa Smurf' would start that discussion.

Beyondblue CEO Kate Carnell said the initiative was fantastic and described how, with 1 million Australians living with depression and more than 2 million with anxiety, mental illness affected all workplaces, including mines.

Ms Carnell drew attention to the potential mental impact of a fly-in, fly-out lifestyle on workers in the mining industry.

"FIFO work practices combined with long shifts and remote locations are potentially a risk factor to depression and anxiety," she said.

At the launch, Heather Weston described how her husband, who had worked a FIFO roster, had ended his life 18 months ago.

Mrs Weston spoke of the need to 'de-stigmatise' mental health and hoped that, because of increased awareness surrounding the issue, people would take the steps needed to receive treatment.

Redpath CEO Rob Nichols said that although Redpath was a company where, "we care about our employees, we support our employees", there were particular challenges in talking about the issue of mental health in 'macho', or male-dominated industries.

Redpath's general manager metalliferous, Rory Burke, said more had to be done to inform employees about anxiety and depression.

"We need to not only provide avenues for employees to seek help but we need to educate all employees on recognising the warning signs, not only in themselves, but also their fellow workers," Mr Burke said.

According to an Australian Bureau of Statistics study conducted in 2007, one in five Australians have a mental illness.