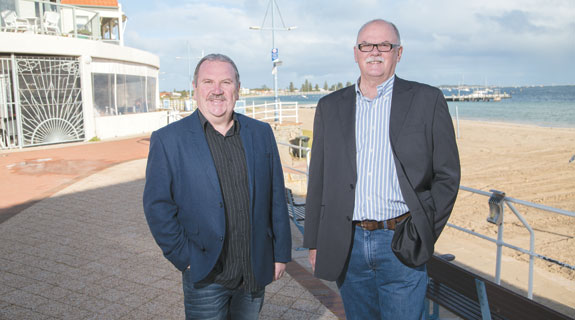 The City of Rockingham is advancing plans for a major redevelopment of its foreshore, opening the door for high-density residential and commercial development on the beachfront.

City of Rockingham chief executive Andrew Hammond said an economic development strategy for the beachfront area, to be known as the Waterfront Village, had recently been completed.

Key features being considered at Rockingham Beach, which is the metropolitan area’s only stretch of north-facing coastline, include an ocean pool, enhanced streetscapes, and increased alfresco dining, designed to attract apartment, hotel and food and beverage developments.

“We’ve got a lot of undeveloped land with a lot of potential down there, so we’re really going to focus on making it a world-class foreshore recreation and entertainment precinct,” Mr Hammond told Business News.

“On the beachfront the height limit is eight storeys, but we can go to 10.

“We’re happy to look at any type of development because the facilities that are going to come with it, particularly the ground floor commercial, retail and food and beverage, are going to be an attractor for our residents as well, so everybody wins.

“Our rate base increases, the investment creates employment, and our locals win because there is a better range of facilities.”

City of Rockingham Mayor Barry Sammels said about $15 million was spent redeveloping the foreshore a decade ago, but the area was in need of further revitalisation.

Mr Sammels said the city was particularly keen to attract a major hotel at its beachfront, to cater for both business and leisure tourism demand.

Diploma Group recently began construction of a $24 million Quest Serviced Apartments property on Flinders Road, but with a dearth of full-service accommodation in Rockingham, Mr Sammels said there was certainly room for another hotel operator.

“A hotel is what we really want to get down there,” Mr Sammels said.

“We understand developers want to get their return quickly, but we’d really like to attract short-term accommodation.

“We’re happy to talk to proponents regarding incentives, and we’ve already been in discussions with potential proponents, both in the eastern states and internationally.”

Mr Hammond said the business case for a beachfront hotel would be significantly bolstered if two proposed marina projects at each end of Rockingham Beach came to fruition.

The Mangles Bay development area comprises 75 hectares, with Cedar Woods planning a major hospitality and tourism precinct to go with the boating facilities.

At the other end of the beach, developer DevX has won approval for its Port Rockingham project, but there is some concern over the ability of the company to find funding for the proposal.

Nonetheless, Mr Hammond said the marinas would be an attractive proposition for a potential hotel operator.

“If we’ve got a world-class foreshore park, with an ocean pool and a marina at each end, I would have thought that would be irresistible for a hotel,” he said.