The redevelopment of Claremont has the potential to change the way local governments look at revitalising tired suburbs. 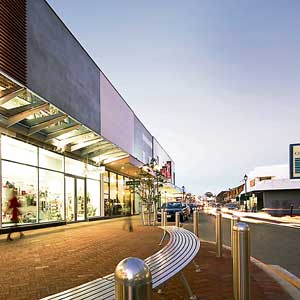 NEW CENTURY, NEW FOCUS: THE REDEVELOPMENTS, WHICH WILL INCLUDE 650 NEW DWELLINGS AND UP TO 12,000SQM OF COMMERCIAL SPACE, ARE BEING PROMOTED AS A MODEL FOR URBAN INFILL.

MORE than 650 new dwellings, 33,000 square metres of new retail space and 12,000sqm of commercial offices will be built in Claremont under a series of mixed-use developments.

The developments, within the existing town centre and north of the railway, are being promoted as a model for urban infill.

The proposal includes the addition of 30,000 square metres of retail space, 77 residential apartments and 600sqm of commercial office space to the town centre.

Stage one is complete and stage two is due for completion early in 2011.

Saint Quentin's will provide 62 residential apartments and 21 commercial suites with an end sales value of $118 million. Completion is expected by November this year.

And planned developments just north of the existing town centre, around the periphery of WA Football League club Claremont's home ground, will further transform the area.

The north-east precinct, comprising 9.4 hectares of land, will become home to 11,700sqm of commercial office space, 3,400sqm of retail and 527 dwellings, clustered around the football oval, which will continue as a WAFL venue.

Structure plans for the north-east precinct also call for an upgrade of Claremont train station to foster a more efficient public transport link.

Town of Claremont principal urban planner Ben Rose said the structure plan for the north-east precinct was approved by council in December last year, and amendments to the Metropolitan Region Scheme and Claremont's Local Planning Scheme number 3 would be tabled in state parliament by mid-October.

Mr Rose said once the rezoning was complete, the structure plan would be submitted to the Western Australian Planning Commission for approval.

"We're looking at the end of this year, late October, early November for all the planning approvals to be completed, which will be quite a milestone for the project," Mr Rose told WA Business News.

"Since about 2004-2005 the town's sunk quite a lot of resources and money into pulling together a detailed plan.

"We've worked with the community from the start to get that general vision and get everybody on the same page and heading in the same direction, and now the structure plan is the nuts and the bolts."

One contentious aspect of the redevelopment is a realignment of Shenton Road over the existing railway parking.

"The town's looking at complementary parking arrangements because not all the parking is used at the same time. It's just getting a bit smarter about how you use the land rather than just providing car parks willy-nilly for all and sundry."

The structure plan also calls for a minimum 200-bay multi-deck park and ride facility to replace the existing carpark at the train station.

The new developments are expected to produce a flow-on effect that will further revitalise the suburb, Mr Rose said.

"The ripple effect from the Multiplex-Hawaiian development is immeasurable," he said.

"They're looking at upgrading that, bringing the cafes and restaurants out onto the street and upgrading the width of the pavement so that people and diners can together."

Curtin University professor of urban and regional planning, David Hedgcock, said the Claremont town centre redevelopment represented the sort of urban infill project that was being encouraged by the Department of Planning throughout the metropolitan area.

"There is an increasing recognition in planning circles that we must start thinking differently about the way we design and use our town centres," Professor Hedgcock said.

"High density housing is a part of that and is seen as a way of populating and energising these areas.

"The 9-5 big box shopping centre is last-century thinking. This century's activity centres will be characterised by diversity, intensity and energy."

Mr Rose agreed, saying that although the Claremont redevelopment was not originally intended to become a model for other metropolitan councils to follow, others could benefit by emulating the land-use principles.

"We're in the business of making sure the town centre and other centres around the town of Claremont are active and viable," Mr Rose said.

"The state government probably sees the Town of Claremont as a model for delivery of its Network City and Directions 2031 objectives, and there's probably a very clear indication that Claremont's a model for sensitive urban infill.

"There are other WAFL ovals through the metro area, like Bassendean, East Fremantle and Mandurah, that are looking closely at the (north-east precinct) to see what can be done."