Redbank back after 18 months 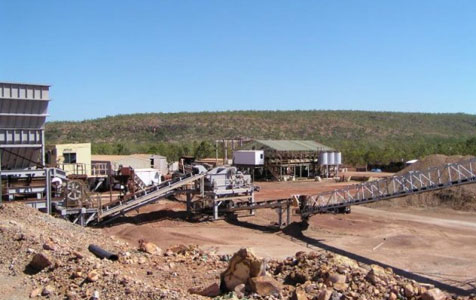 The Redbank copper operation in the Northern Territory.

Redbank Copper shares had a lukewarm return to trading today, closing at 0.4 cents after a major restructuring and recapitalisation led by investor Michael Fotios.

All three companies previously ran into financial difficulties, when they were part of mining identity Michael Kiernan’s business grouping.

The restructuring has been driven by Mr Fotios’ investment company Investmet, which holds a wide portfolio of junior mining stocks after its success with gold miner Northern Star Resources.

Redbank shares traded today for the first time since November 2011, when they were suspended at 0.3 cents; they briefly touched 0.6 cents today before closing at 0.4 cents.

The company had raised $8.2 million at 0.5 cents per share, with the major backers being Mr Fotios and Wyllie Group.

Mr Fotios has a 32 per cent shareholding, through Investmet, Delta Resources Management and his family company, while Wyllie has a 17 per cent interest.

The company plans to focus on exploring its namesake copper project in the Northern Territory, to firm up the known resource.

Its board has recently been bolstered with the appointment of experienced company director and Allion Legal principal Craig Readhead.

Mr Readhead, along with Azure Capital chair John Poynton and former banker Wayne Zekulich, has also recently joined the board of Swan Gold Mining, which is chaired by Mr Fotios.

Swan Gold is in the process of raising at least $15 million at 2 cents per share, as it moves toward completion of its restructuring and recapitalisation.

The raising was originally due to close on 26 February but that deadline has twice been extended, most recently to 13 May.

In the interim, it has entered a loan agreement with Investmet for up to $3 million for working capital purposes.

Its principal asset is the Davyhust – Mt Ida project north of Kalgoorlie, which has been on care and maintenance since 2008.

The complex restructuring process has included Stirling Resources transferring most of its shares in Redbank and Swan Gold to Investmet.

Stirling’s major investments after the restructuring are shareholdings in mineral sands miner MZI Resources (29.5 per cent), Redbank (2 per cent) and Swan Gold (11.6 per cent).